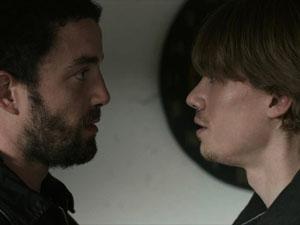 In Beyond The Walls, what begins as an impromptu one-night stand between Illir (Guillaume Gouix), an attractively scruffy man with little time for romance, and Paulo (Matila Malliarakis), a confused and more sensitive young man, evolves into a more long term relationship due to unexpected circumstances. But no relationships is ever immune to what life throws at you and the trials of time.

The LGB cinema finds itself in a somehow uneasy position at the moment. With so much social progress lately, it does make you wonder if films dealing with issues are still needed. But then of course, no matter how much advance there has been, with gay weddings being introduced in more and more countries etc... there is still so much oppression and homophobia around the world, or even within some of the most socially advanced countries. An then there is a certain kind of ghetto LGB cinema with a very specific target audience in mind. Not that there is anything wrong with that, other minorities also have their own niche films targeting them.

But Beyond The Walls is not one of those films dealing with such issues. Instead, it purposes itself to offer the razor-sharp observation of a relationship between two men, in all of its complexities and intimacy, as well of its development over time. As such, Beyond The Walls reminded me of Blue Is The Warmest Colour, which I saw in Cannes where it won the Palme d'Or, with which it shares some obvious qualities, but not because it features a gay couple. Just like the Abdelatif Kechiche film, and just like any great film, it is simply engaging enough to resonate within a large audience. 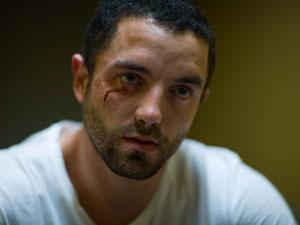 It is a very precise and intimate study, that is not afraid to sometimes picture its two leads in a less favourable light, coming across as real and complex characters. There are few supporting characters in here, the story truly is all about Illir & Paulo, who find themselves thrusted into a relationship almost unwittingly due to circumstances, and then a few challenges along the way. The director shows all the complexities and intimacy with much nuances and depth, making the story feels utterly real. The relationship between the two lead actors is so strikingly authentic that you do wonder if they actually had an involvement in the script and how much improvisation took place during the shoot (and I was able to both ask them that question, as I was lucky enough to interview them! The interviews will be posted in the next couple of days). The intimate scenes between them two are particularly successful, in a way that is seldom achieved by cinema (remember in the 80's when two people could not get it together without saxophone playing in the background? *shivers*)

And most interesting of all is how both characters evolve. Guillaume Gouix is proving to be a rising star among young French actors, having shown his versatility in Poupoupidou (sadly never released in the UK) and the TV serie The Returned. Here he first comes across as almost detached, unwilling to commit himself and less than impressed when Paulo moves in with him, having nowhere to go. But love has a way of creeping up in the most unlikely way and the French actor brings in much nuances to his character, with a mixture of softness and toughness as the charm and helplessness of his younger lover melts his facade. Matila Malliarakis (also in The Returned) has the difficult task of portraying a character which is not quite as sympathetic, but again, thanks to the nuances of his performance, he manages to make him more than just a rather manipulative young man his first comes across as.

Beyond The Walls is a brilliantly written and acted romance, which feels raw and almost uncomfortable to watch at times, making it so human in the process.

Beyond The Walls. France 2012. Directed by David Lambert. Starring Guillaume Gouix, Matila Malliarakis, David Salles... Out on dvd in the UK. Click here for more info