Silence, a film about sounds 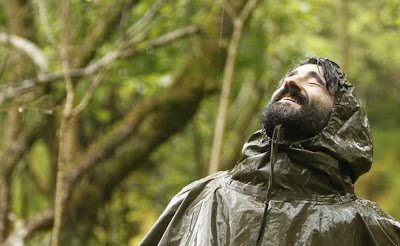 Silence by director Pat Collins is, as the title antagonistically suggests, a film about sounds. But sounds that are far from human-made noise, so when I sat down on my seat with a bottle of water in one hand and a bag of crisps on the other, and the film hummed its blissful massage-like tones, I felt embarrassed at every bite, crick and crack. As any good Londoner (from abroad in my case) would.

Pat Collins is a film-maker from Cork, who has directed over 25 documentaries. He’s won a bunch of awards, from the Jury Award at the Celtic Film Festival in 2000 with his first documentary Michael Hartnett - A Necklace of Wrens, to the Michael Dwyer Discovery Award at the Dublin Film Festival in 2012 with his first fictional film Silence. The latter has been co-written with Sharon Whooley and Eoghan Mac Giolla Bhride, who is also playing the main role in the feature as himself.

The film tells the tale of an Irish sound recordist (Eoghan Mac Giolla Bhride) who is commissioned the job of recording places free from man-made sounds. It starts, in contrast, with all the racket of a train station in Berlin where he now lives. He tells his girlfriend that he is leaving the city to his native Ireland, where he is going shoot the documentary. He first goes to a natural park where he discovers that a rock breaker is disturbing his 'silence' recordings. He gradually goes further and further into the wild in search of that ultimate unspoiled natural, almost virginal sound, until he reaches his childhood home in the remote Tory Island, where he has not returned in 15 years. 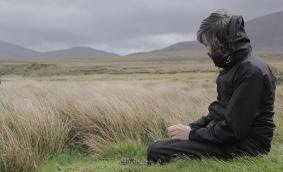 His quest is a metaphor about exile and returning to the beginning, to the womb of his childhood home (to the silence), and the intangible memories that one has left behind, as intangible as the sounds he's trying to record. And it contrasts with the tangible ruins he finds in the house he was born in towards the end of the film, as if to reassure him that there’s no return. That life, the simple life of his ancestors and the folklore is disappearing, and so it leaves you with a sad taste on your tongue (and your ears). But he tries to preserve it and not let it go by recording the sounds and making the documentary. And he also does that by meeting a variety of people along the way (a farmer, a writer, a fisherman) who have jobs closely knitted to the land or bare of the more industrial footprint. And even though they are human voices (therefore human sounds), they are part of what makes Ireland, its people and its folklore.


Silence is a road movie without the road or a car, but nature and his feet: a man in search of God (although not a religious one, but a folkloric one) or Meaning with capital M in those sounds he’s trapping inside his tape recorder. And at the end he finds nothing. Or if one was more optimistic, one could say that he re-connects with his childhood memories by returning, as we hear the voices of his the past in that house – children playing, people chatting – while he wonders through the decayed house. And that should be enough.