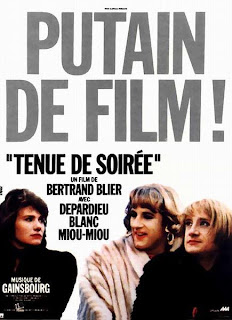 First of all, apologies for the long break! Moving to a new place meant no internet for a fortnight. At least, it gave me time to watch films. I went on a bit of a French Festival, having picked up a few dvds in Paris, and one of them I found was one I have been wanting to watch since 1987.

My favourite decade for films is the 80's, as much for the films I saw then as for the ones I knew about but did not get to see as I was too young. I had my imagination in overdrive trying to imagine what they were like, solely based on a few stills, in those pre-internet days. One of them was Bertrand Blier's Tenue De Soirée, with its outré poster featuring Gérard Depardieu and Michel Blanc dressed up in drag like some cheap and unconvincing transvestites, and its tagline, which I shall not translate because Blogger does not allow swear words. I knew it was not for me but I was fascinated by it.


So I have finally watched it. Director Bertrand Blier was in his heydays for most of the 80's, having first made a splash in the mid 70's with Les Valseuses, and peaking up with his best film Trop Belle Pour Toi which narrowly won the Palme d'Or in 1989, being narrowly beaten by Sex, Lies And Videotapes (the jury subsequently explained that they asked to watch both films again before making a decision). And then its career crashed spectacularly right when the 90's began, mainly due to a lack of fresh ideas, never to recover.

Tenue De Soirée begins in a tacky dancehall, where down on their luck couple Monique (Miou Miou) and Antoine (Michel Blanc) are arguing. Or more like it, Monique has launched a tirade of abuse towards her lovestruck husband, who, as often the case, is more and more in love the more abuse he gets from her. But they are interrupted by Bob (Gérard Depardieu), who gives Monique a spectacular slap to shut her down (which was seemingly acceptable in those less enlightened years in France), before showering her with money to calm her down.

It emerges that Bob is a small time crook/burglar, who decides to take the couple under his wing, saving them from a life of poverty in their caravan, and training them in his ways for a life of luxury, burglarising the wealthy's homes, often with some surreal consequences. It almost emerges that Bob has more than friendship in mind when it comes to Antoine... 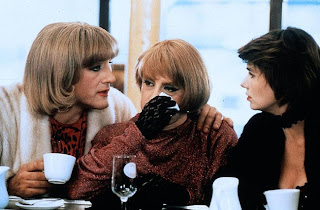 In some ways, this is pretty much textbook Bertrand Blier and his unique style. The dialogues are brilliant, if a little overwritten (but that is part of their charm), and there is his very unique blend of realistic surrealism (if this makes sense). We are not talking about a log lady turning up, or people swapping identities half-way through. More like an detached surrealism where characters almost seem to be veering off their own characters, or talking as if they were actually outside the plot and commenting it.

While the film feels like it might be running on empty after its first half, it actually evolves in the most unexpected and bizarre ways, without revealing too much, especially the relationships between all three main characters.

Gérard Depardieu was at his best in his decade, here displaying his blend of rough tenderness, which was also so impressive in Police by Pialat. Miou Miou is moving while never trying to make her character too sympathetic. But Michel Blanc is the revelation (and he won best actor in Cannes), with a character who goes through so much, emotionally, and with the actor expressing all of this with much finesse.

Bertrand Blier seems little known outside France, and it is high time to rediscover his work, I dream of a BFI retrospective, as there has been nobody quite like him ever since.