The Mortal Instruments: City Of Bones 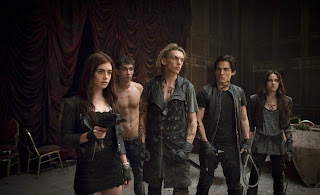 Clary (Lily Collins) is just an ordinary girl living an ordinary life of teenage sulkiness in New York City. Or so she thought, until she finds herself in the midst of a war between angels and demons, taking place in front of humanity's very eyes, but invisible to most of them. For Clary is a Shadow Hunter, blessed with supernatural powers, and whose role it is to protect humans. And she is thrown into action when her mum (herself a Shadow Hunter) is kidnapped by a demon. She must join other Shadow Hunters, finding out a few truths about herself along the way, and fulfil her destiny.


Until recently, film adaptations of young adult novels were seen like a sure recipe to success, with their already established and loyal (to say the least) fanbase, with the staggering success of Twilight and The Hunger Games. Then came 2013, which saw The Host and Beautiful Creatures crash and burn at the box office. And now, as we are waiting for more adaptations in this sub-genre such as Enders Games, comes The Mortal Instruments: City Of Bones.

The source material amusingly feels like a mash-up from previous young adult novel adaptations, all the elements are here: the sulky teenager thrown into a fantasy world in which she is meant to play an important part, the conflict with her parents (here taking an interesting twist however), the romantic triangle with two brooding young men (one of them with an obligatory English accent). And when vampires and werewolves are introduced later on, I nearly chuckled.

At least the story, despite the religious overtones, does not try to push an obvious moral agenda, unlike Twilight, and only seems concerned in telling its story, which is refreshing.

Like many other of his predecessors, Mortal Instruments: City Of Bones suffers from having to unravel a rich mythology for those in the audience who have not seen the film, while trying to get the story going at a decent pace. As such, the film feels rather disjointed, and many elements only glanced over. I have no idea how faithful this is to the source material and how fans are going to receive it. But as a fantasy film, it does what it sets itself to be fairly well, with a few impressive set pieces and a couple of scenes verging on the frightening, the whole affair being reasonably entertaining.

Lily Collins is the lead and also the best thing about the cast. She confirms all the good things I thought about her in Mirror, Mirror, with an evident screen presence, and the ability to make the character of a sulky teenage girl (is there any other kind?) fairly likeable. And Lena Headey in a small part is always a joy. Men do not fare quite as well however. Jared Harris is lumped with an underwritten part, and Jonathan Rhys Meyer as the late coming baddie of the piece looks rather bemused. And the two romantic interests are unmemorable (there always HAS to be a love triangle in those stories).

I am giving the film a rating of 2* 1/2, and this is exactly where it sits, right in the middle. It is not an offensive film that will make you want your two hours back, you will find yourself entertained... but you will not be missing much by skipping it altogether either.

The Mortal Instruments: City Of Bones. USA 2013. Directed by Harald Swart. Starring Lily Collins, Jonathan Rhys-Meyer, Lena Headey... Out in the UK on the 23rd of August.