STARBUCK - His cup runneth over... 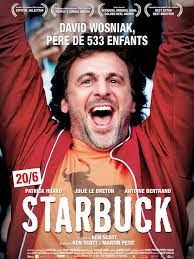 When David Wozniak's girlfriend announces she is pregnant, forty-something slacker David gets a huge shock, as he leads a carefree life as if he was still in his early 20's. He works for his father's butcher business delivering  meat, and generally stumbling through life as fun nice guy, who can't be trusted with anything serious. He owes a lot of money to some loan sharks, who are more than happy to beat him up in an attempt to get him to pay up. Valerie (Julie Le Breton), his cop girlfriend, has decided she doesn't want him helping to raise the baby, but the sudden announcement makes David look at life with a new perspective as he decides to change his ways.


Starbuck, is the smash hit comedy set in Montreal, that was selected for the Toronto Film Festival, and is now being remade by Dreamworks, with Vince Vaughn in the lead role. So please, please see the original! As soon as I see the name Vince Vaughn linked to anything I know it's going to be so mediocre, suitable only for falling asleep to on a long haul flight. Ok he is not as bad as Adam Sandler - but pretty close. But back to the film, set in the quirky Mile End neighbourhood of Montreal, the bold colours used reminded me of Amelie. The director says, he chose this area as it's very multicultural and not just full of the usual chain stores that have taken over the world. 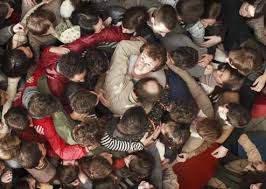 Shortly after David (Patrick Huard) finds out about his impending fatherhood, his lawyer best friend, a young John Candy type played by Antoine Bertrand, informs him that the clinic where he made regular sperm donations in his early years, have been contacted by 142 children wishing to find their biological father. David then finds out that his sperm was used to father 533 children in total! This is not a true story, but in fact  a story about fatherhood, and how it affects your life. Starbuck was the name of a famous Canadian bull, who sired over 2000 calves, and this becomes the nickname for the 'donor' once the story gets out to the media.

For me, one of the more interesting things of the movie, is the assorted bunch of young adults searching for their father, and almost all of them are young actors doing their first feature film. They vary wildly from the football hero to the junkie, and since David has been given their details, he goes about trying to find out a bit more about some of them, without actually coming out as their donor daddy.


Director Ken Scott also co-wrote the script with Martin Petit, and they have won a slew of awards for this film. Scott, a father himself has certainly not held back in showing the tough side of parenting. Canada gives complete anonymity to sperm donors, but laws in other countries can vary. Apparently there are more rules governing the purchase of a car, than there are for sperm. Despite being a laugh out loud comedy, the film raises the very serious issue of the right to find out who your biological father is. Perhaps the next step will be children searching for their biological mother, as we see more and more men raising children from egg donor's via surrogates.

Starbuck was shown at the Québec Cinema Showcase in London last week-end. It has enjoyed a tremendous success at the box office both in Québec and France, and will be released on the 23rd November throughout the UK.
at 21:40