Detention: The Post-Post Modernism Of Horror


An unconspicuous title and an ugly DVD cover were not exactly the most encouraging signs for Detention, a film which made very little waves at the US box-office despite a rather subsequent budget for that type of film ($10M if IMDB is to be believed, as a comparison, Insidious was made for ten times less than that). And yet Detention turned out to be one of the maddest horror films of the recent years, not entirely convincing but with enough energy and invention to make it unmissable for fans of the genre.

Detention has probably one of the best opening of any horror films, ever! And although it would have been foolish to expect the film to keep it up, it still gives a good taster of the things to come. This scene feels like a feature length film compressed to five minutes, by a director who would have misplaced his Ritalin pills, such is the frenetic pace of it, with more killer lines, laugh-out-loud moments and violence that many horror films manage to fit in their whole duration.

In it, a group of high school teenagers find themselves stalked by a masked madman (or madwoman?) who has taken the appearance of "Cinderhella", the killer in a popular horror film trilogy. 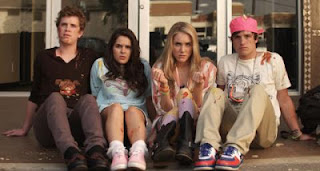 While Scream introduced the post-modern horror, having characters fully aware of the codes of the genre, here it is as if we have gone to the next level of meta-meta horrors. Just the same way as the Scream characters were fascinated by and fully aware of the 80's horror classics, here it is a whole new generation of characters who were about 5 when Scream first come out, and seem to have watched every single film which has came out since, especially horrors. It almost gives it an "Family guy" vibe, with random and lesser known movies being endlessly quoted.

And what starts off as a horror, or more accurately half way through between a proper horror and a parody, gets more and more insane by the minute, adding elements from Clueless, Breakfast Club, Scream, 80's slashers, but also Freaky Friday, and even science-fiction and time travel.

With its bright colours, attractive young cast and mash-up of genres, it did also strongly remind me of both Nowhere and Kaboom, especially with the doomsday and science-fiction elements, if Greg Araki ever decided to make a horror film.

While the set up of an American high-school, which occupies such a big part in the horror genre, feels a little artficial, it is almost the point, a comment of how well worn the tropes of this sub-genre have become. I am actually convinced that American high-schools have become a chicken and egg scenario, with ultra self-conscious students behaving in the coded way presented to them in films, with the different cliques and stereotyped personalities.

The film is not without its weaknesses. It does try a little too hard to be cult (although it has a lot more coherence than the recent cultish wannabe John Dies At The End) and feels overwritten in parts, with lines that feel wholly unnatural and way too clever. And while you cannot fault the ambition, the last act is a tad TOO insane and complicated for its own good.

There is an intriguing element of 90's nostalgia, partly thanks to the time-travel which made me wonder whether the director was actually wholly serious about it, or whether it was a swipe at the neverending nostalgia for the 80's that us, horror fans, rejoice in. Will 90's nostalgia actually ever happen? Will people dress like characters from Pulp Fiction and go to 90's parties where Nirvana is being played? Somehow I cannot see it happen.

While the whole cast is perfectly perfunctory (with a pre Hunger Games fame Josh Hutcherson), I have to add that I spent the whole film wondering who the terrible actor who looks like Dane Cook was. Turns out, it WAS Dane Cook. You know, the man Juliette Binoche was supposed to have fallen for in Dan In Real Life! (Talk about cosmic implausibility)!

Detention is the sort of film which demands to be seen in a crowded cinema full of horror fans who will lap it up. And it is disappointing that, apart from its Frightfest screening last year (one I'd travel back in time to attend, it must have been a riot!), it did not get a UK cinema release, an always baffling state of affair considering the drivel which actually does make it to our screens. It certainly demands a second viewing at least to unwrap of all its madness, jokes and references, or even to understand its ending. It is at least available on DVD now.

If I had to describe it in one sentence, it would go like this: "Detention: meta-meta slasher meets Clueless meets Breakfast Club meets Freaky Friday meets Kaboom with added 90's nostalgia; tries a bit too hard to be cultish, but a cornucopia of exhilarating and random madness." Oh and one last thing, it also features one of the funniest "film within a film within a film within a film" scenes!