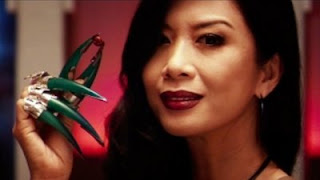 The English title of this film, Red Nights, is the dull and truncated translation of the wonderfully evocative French one,  Les Nuits Rouges du Bourreau de Jade, or The Red Nights of the Jade Executioner. Attracted by its intriguing trailer, I have finally managed to catch it, as the film has been released on DVD in the UK. And it did not disappoint, a an ultra-stylised dream in red and blue.


In Red Lights, Carrie Chan (Carrie Ng) is coveting the ultimate poison: a millennium old elixir which heightens the senses (quite why you would want your senses heightened as you are dying is anybody's guess, it reminds me of the slo-mo in Dredd!) But she is not the only one, with Catherine (Frédérique Bel), a sort of hitwoman/mercenary/free agent is on its trail as well as a whole lot of unsavoury characters. 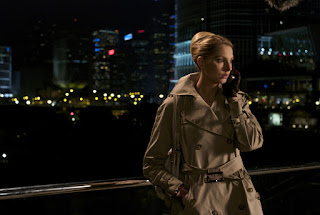 When I call it a French Giallo, it is not quite correct, as there are all sort of influences in here: Hong Kong cinema first of all, with some gorgeous shots of its neon lit streets at night (the two French directors who live in the Asian city have worked with Wong Kar Wai and it shows, but also with Johnny To and Tsui Hark). There is also a nod French film noirs of the 50's (The Samurai has been quoted as an influence), as well a certain kind of eurotrashy 70's espionage cinema, with its multilingual protagonists and sometimes confused plot. And watch out what that hilarious A Nightmare on Elm Street hint!

But the shadow of Giallos is ever present. While there are no masked killers and whodunnit in here, their esthetical influence is felt in every shot. Most of the film is lit through bright red and blue filters , there is a almost fetishism to showing glamorous women's clothes in close-up, including that old giallo's staple, the trench coat. And yes, black leather gloves do make an appearance. I could be wrong but I could swear a scene featuring a murder with some most obviously fake blood which looks more like pink nail varnish is meant as a tribute to the sometimes shoddy special effects of the classic films it is paying tribute to. 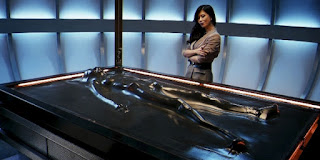 Making a departure from giallos however are the female characters. It is refreshing to see a film when strong women are completely in control and I am not talking about a certain male's fantasy of a strong woman who runs around in hot pants. Here male characters barely exist and it is the women who pull all the strings, even the female victims are not just slasher's fodder.

The pace is rather slow, with an almost dreamy, loungy vibe to it, which suits it well. And some of the death scenes are as elaborate as anything Dario Argento could have come up with, with an extended torture scene which would be unbearable if it wasn't so stylish. Similarly, just as it was the case with giallos, the plot makes little sense and is in part a little confusing. Which is fine by me, not only I am a strong supporter of style over substance, I actually am quite fond of those films who do not feel the need to explain everything.

But then does that make Red Nights a style exercise with little emotional involvement? Not quite, thanks to the main character of Carrie Chan, aka the jade executioner, who really comes into her own on the third act as we understand her motivations better.

We never quite know what Carrie exactly does for a living, apart from being impossibly beautiful and glamorous. At times we see her at a function launching her own perfume (obviously called Red Nights). Others she is managing a Chinese opera, staging the story of that infamous poison she is coveting. All we know is that she is wealthy enough to do as she pleases.

Her character can almost be seen as a metaphor for a film director, as if a director was staging her own life, and she shapes up the world around her according to her fantasies. Yes she tortures women and kill people, but she does so following a coda of exquisite estheticism which only her can truly fathom, as if she was the twisted Wong Kar Wai of her own life. And her chamber of torture, within the ground of her opera, is a sight to behold,  as if she had asked Dante Ferretti to design the set of her life.

It is interesting that giallos are going through a sort of tribute at the moment, with no less than four recent films inspired by them: Amer, Berberian Sound Studio, Tulpa and now this. It is as if, with the advent of IMDB and Lovefilm/Netflix, a new generation is being allowed to discover more and more films from the past with more ease than anybody has before them, shaping up a fetichism for cinema, one that I wholeheartedly welcome and share.