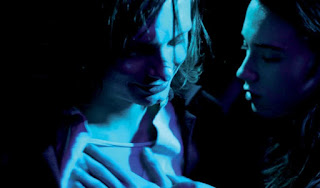 Just as the London Film Festival 2012 was running the danger of becoming a very average edition, all of its best films came thick and fast at the end, and salvaged it. After a flurry of good, decent, disappointing, flawed films came a serie of four wildly different ones which all exceeded my expectations and restored my faith in the festival and films, three of them seen in the same day, as below. 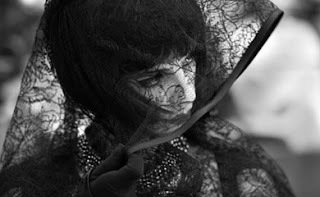 First of all was Blancanieves, a Spanish silent black & white adaptation of Snow White. To watch it I braved the painfully uncomfortable seats of the ICA. Poor ICA, I am not blaming them, I can only imagine their budget is tight. Having said that, their seats feel like a kind of contraption straight out of Saw, designed to maim and inflict mental and physical anguish. I suffered through two films in there back in LFF2010 and vowed never again to submit myself to it. But Blancanieves made it all worth it. I have written a full review of it for Cinemart so you can read it here. But all I will say is that to me, it is part of a growing and reflective trend of film fetichism which encompasses such recent films as The Artist, Berberian Sound Studio, Tabu and even Holy Motors. It even features the best acting rooster ever seen on films. And Blancanieves became my favorite film of the festival.

That day I also saw yet another favourite of mine, Atomic Age by Héléna Klotz. The young director was on stage to introduce her film, and urged the audience to let themselves float, a very apt description of the state of mind the film induced. Over the course of one night, we follow two young male friends in Paris as they go from club to empty streets, trying to pull girls, struggling to make sense of their growing feelings for each other and the world around them. Not  the most original premise I hear you say. But Atomic Age transcends any sense of familiarity thanks to its very singular vision and assured direction. And there is an almost dream-like quality to the depiction of the mental and physical wandering of its protagonists with the very unusual electronic soundtrack and a gorgeous night photography with its scarcely lit compositions. 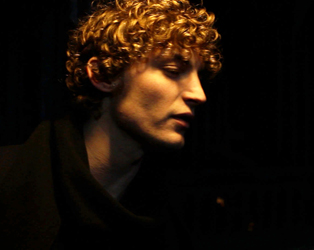 Atomic Age perfectly captures the essence of night life, the almost dream-like emptiness of the normally busy streets of a capital, that time when the respectable day time social conventions vanish, the feeling that the night will last forever...

One of the aspects I enjoyed the most about The Atomic Age is how the film completely embraces what can be perceived as a certain kind of pretension. It is one of those films that get labelled as "very French" and for once it is no insult. I have to admit, even I nearly got the giggle as some of the lines uttered by the young actors felt a little laboured, but laboured in a philosophical way, and the film is all the more charming for it.

There is a striking confrontation scene outside a club, between the two leads and an arrogant posh spoilt git who looks like Nicolas Sarkozy's son (played by Niels Schneider from Heartbeats). An American film would have seen them push each other and fight, the two geeks would have come up with a wisecrack line before being comprehensively beaten. In here it is as if a verbal ballet of conflicting visions of life is taking place. Only in French cinema!

And finally, as the last film of the day, The Wall, which concluded this trio of excellent films.

The Wall almost feels like it does not belong to our era, and would feel more at home with that period of the 70's/early 80's when a certain kind of heavy going arthouse philosophical cinema reigned supreme. And with its sci-fi twist, you would almost expect it to have been directed by Andrei Tarkovsky in his later period of Solaris and Stalker. In a time where popular culture has invaded our screens and tackling heavy subjects full frontal without a hint of irony has gone out of fashion, The Wall feels like a breath of fresh air. Not that it is actually pretentious or tedious, far from it.

In The Wall, a middle-aged woman goes on holiday at a friends' house, nested in an isolated corner  of the Alps. She wakes up one morning to find the occupants of the house vanished, and, having gone on a wander, finds the path blocked by a mysterious and invisible wall. To her horror, she realises that this force field circumvents a huge but closed out area of the mountains, meaning she is alone inside it (or is she...) and unable to escape. Bewilderement, then despair follows, as it becomes painfully clear that she is now trapped, and will have to rely on herself to survive, alone, bar the company of a few animals, as days, then weeks, then years go by...

Coming out of the screening, I described this as an arthouse Cabin in the Woods. It has also been compared to Robinson Crusoe for its study about solitude and the place of man against an indifferent nature, but it is closer to the French adaption of the Daniel Defoe's classic, Vendredi ou Les Limbes Du Pacifique by Michel Tournier, which took this well known story and explored and emphasised its philosophical ramifications even further. 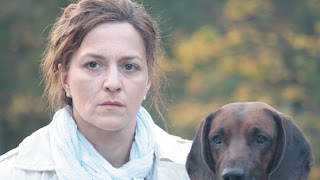 The film is not all that interested in offering any explanations for the presence of the wall, although there are some slight hints of a divine punishement, as the lead is forced to lead a back to basics, ascetic life if she has any hopes to survive, away from the technology of modern life. Powerful themes are being braced here, obviously loneliness but also the human instinct to survive and carry on when there seem to be so few reasons on, which echo the recent The Turin Horse. Ultimately, it asks the question, what is the point of living if there is nobody else to share it with/interact with or even merely witness it?

The acting by Martina Gedeck is a real tour de force, with a subtly physical performance, in which the actress conveys all the anguish of her predicament with nobody else to act against. Her constant voiceover narrates the film as the story is presented in flashbacks from her recollection of the events, written in whatever available paper she finds as she is facing an uncertain future. I did wonder if the film could have gone even more radical and let go of that voiceover, relying solely on her facial expressions, but that might have been a tad extreme.

I have to admit, if I had to be stuck somewhere away from the whole of humanity, the sometimes hostile but nonetheless gorgeous and almost idyllic mountainous location she finds herself in would get my vote any day. I mean, she could have found herself trapped in Croydon, the horror...

It is all the more interesting to have chosen a woman of her age as they are barely ever represented in sci-fi/horrors, whereas a young, sporty woman in her place would have taken the film in a wholly different direction.

The Wall has been picked up for UK release by New Wave Film and I cannot recommend it enough. It is endlessly compelling, it manages to pull off a couple of very frightening scenes without any showy effects, and is one of those rarities, an intelligent yet totally accessible film.

And after The Wall, the end of the festival was near. There was still time for a surprise Hollywood A-lister and a tribute to Jean Rollin's French naughty exploitation of the 70's... You will have to wait for my next post!
at 22:59