The great thing about film festivals is being able to watch some great films you might not have been able to see otherwise. The worst thing about film festivals is not being to watch said films ever again, should they not secure a UK release. Air Doll, presented in Cannes then at the London Film Festival was the best film I saw in 2009 (The White Ribbon what? A Prophet who?) and it never did secure a UK release. Until now. Thankfully, Matchbox Films has just released it on DVD.


In it, Nozomi (Bae Donna, The Host, Cloud Atlas) is a blow up doll owned by a lonely middle aged restaurant waiter who dresses her like a French chambermaid and treats her like his wife, putting her at his table for dinner, telling her about his work routine before a quick romp in bed. One day, Nozomi comes to life, not quite a fully fledged human being but filled with a heart and an endless curiosity for the world around her.

In the wrong hands, Air Doll could have turned out to be so awful. Try to imagine an American mainstream life-affirming (but really vomit-inducing) fable on the subject. Or perhaps even worst, an American indie film being unsufferably quirky and with a hipster soundtrack. 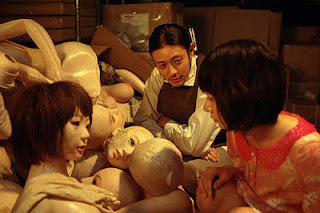 Here it is handled with tact but without shying away from the less salubrious aspects which come from its subject: we see her original owner engage in sex with her before washing her detachable women bits, and she is forever reminded that her sole reason for existence is to appease the loneliness of others.

I love the way director Kore-Eda Hirokazu (After Life) takes his time, and does not feel the need to be efficient and to fill each scene with meaning, which makes Air Doll feel like a breathe of fresh air (pardon the pun). Witness Nozomi's first day as a living creature, as she goes out and explore Tokyo. What could have become a montage of obvious scenes of her learning about the world around her, here is a lot more subtle succession of seemingly random moments, a wholly more accurate depiction of human life!


The director does not trouble itself with too much plausability. We never know why Nozomi came to life, and we accept that she can just take on a job in a DVD store and even date one its employee, who does not seem awfully concerned about the object of his affection's original form. And in a wonderfully moving scene, she gets to meet her "maker", a kind man at the blow-up dolls factory. 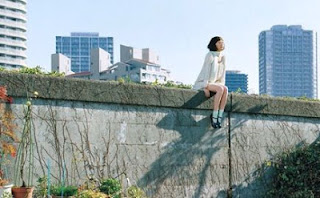 The themes tackled might not seem all that original: the loneliness of big cities, empty lives, but also the role of women in the Japanese society, the loss of innocence... But they are presented with finesse and restraint. Make no mistake however, despite its appearance, it is not a "cute" film, as demonstrated by its downbeat ending, and it seems perpetually imbued with an autumnal feel thanks to its evocative (but not too obviously so) cinematography and perfectly matched soundtrack.

The South Korean actress Donna Bae, in the title part, is sensational, bringing a wide-eyed innocence alongside a joyful melancholy to a wonderfully physical performance. Her character is part Pinocchio/part Darryl Hannah's mermaid in Splash, with a yearning to live and an impossible desire to fit in.

Air Doll is a celebration of the ephemeral joy of living, tinged with an infinite sadness. Like she says it herself, Nozomi's found a heart, and it's heartbreaking.