The gripping life story of Hole drummer, Patty Schemel and her journey through drug addiction, is one of the most entertaining documentary's I have seen for a long time. Overshadowed by Courtney Love, and the crazy drama that seems to constantly surround her, Patty was the drummer for Hole from 1992 till 1998, and  she wrote many of their songs.
Directed by P. David Ebersole, this is his first documentary, but I hope he does more. I loved the inside peek into the lives of Patty and her band mates. Patty was also one of the few openly gay female musicians at the time.
Through interviews with Love and other bands members, Eric Erlandson, Melissa Auf der Mer and Kristen Pfaff we are drawn into the world of Hole, and via old footage we see the back story which includes life with Kurt Cobain, Love's husband at the time. Patty was almost the drummer for Nirvana, but after Dave Grohl auditioned Kurt chose him, however he forged a strong friendship with Patty.
Patty grew up in a small town in Washington state, and from interviews with her mother and brother we learn about her life, from teenage drummer starting bands in high school, her first crush on a friend and the downward spiral into drug and alcohol addiction that blighted her life. She recalls her first drink at 12 years old, ending in a troubled night - this would be the pattern for the next 30 years. 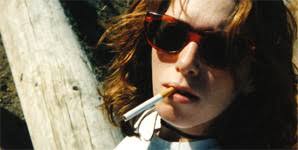 So much of the film is funny, especially when Patty tells her mother she is quitting her job at Microsoft to be a drummer for Hole, and some of the interviews with Love show just how out of touch with  reality she is. It is easy to forget just how important Hole were as a band, and to the grunge movement in the 90's. Patty was the first female drummer ever to be on the cover of Drum World, and for many she is still considered to be the best female drummer ever. What is interesting is how someone can go from seemingly having it all, to ending up with nothing. The inside story behind the music industry and how record producers can destroy bands is fascinating.

Hit So Hard is released on the 16th November, and will be shown as selected cinemas throughout the UK. The DVD will be out early next year from Peccadillo.
at 22:59