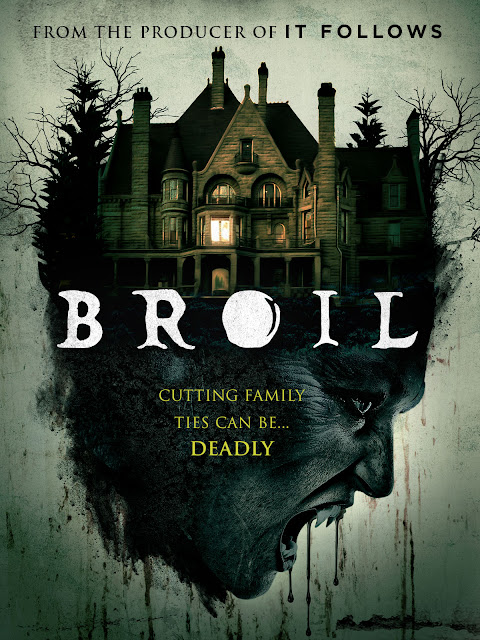 In Broil, Chance Sinclair (Avery Konrad), a troubled teenager, is sent to live with her grandfather in his sprawling mansion after she attacks a classmate who had provoked her. There she begins to realise the extent of her family's power and wealth as well as their monstrous secrets...

It is not that big a spoiler to discuss what the members of the Sinclair family really are, with clues early on such as their aversion to spending too long in the daylight and the daily blood transfusion Chance has to go through due to a "genetic disorder". So kudos to Edward Drake for coming up with a fresh take on the vampire lore.  It is not uncharitable to say that the plot is confusing however. He and co-writer Piper Mars, seemingly filled with ideas, let their enthusiasm get the better of the self-critical judgment and there is just too much going on, too many characters... If only the script had been tightened and allowed audiences to breathe a little.

The first half in particular feels like watching the "previously on..." recap of a series just before the final episode of a season. The mythology they have created would have benefitted from more explanation, more time or a treatment as a TV series indeed, it is all a little too frenetic and adding some mystifying flashbacks to the mix do not help. Thankfully the action focuses more as the film goes but there are many tantalising backstories in here left unexplored which is a shame.Nevertheless, the ambiguous morality at the heart of these creatures is particularly interesting, when so many have tried the "good vampires vs bad vampires" trope before, here it is all a little murkier. There is also a welcome touch of soap opera melodrama, as if the writers had decided that what was missing from the usual vampire mythos was some vintage Dynasty-like antics, with all the family scheming and back stabbing (quite literally in some cases) in a grand old house.

From a stylistic point of view at least, Broil is an undeniable success. Edward Drake has a pronounced visual flair (he started his career as a music videos director) so it is all the more remarkable that he uses it with admirable restraint while still making an impact. The colour palette, filled with shades of crimson and black gives the film a unique identity. Take one early scenes at a teenage house party, the sort that seems to be filmed in exactly the same way in countless films and TV series. Here the director uses a bright red neon light, a simple but striking touch. He also gives his vampire a discrete but striking touch, with their veins glowing with hues of pink and purple at times, a simple idea that looks absolutely fantastic.

Frustrating at times but certainly ambitious and different, Broil is not your average vampire film and one that you might find many delights in if you can overlook some of its flaws.

Broil is out on digital platforms on the 15th of February.