The Lawyer by Romas Zabarauskas 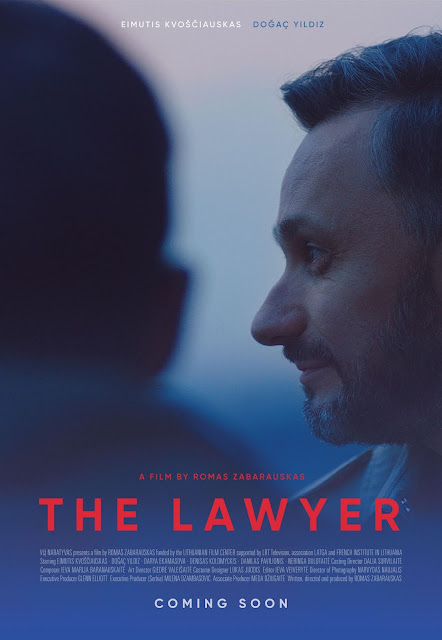 In The Lawyer, Lithuanian corporate lawyer Marcus (Eimutis Kvosciauskas) meets a Syrian refugee, Ali (Dogac Yilkiz) on a cam service and travels to Belgrade to meet him and help him escape to Western Europe, while some complicated feelings slowly develop between the two men.

The premise might make you think you are about to watch an issue film, not there would be anything wrong with that but while film is acutely attuned to contemporary social concerns, it is the best kind of social films, one that never forgets about cinema and characterisation as opposed to just serving us a dour lecture, while still putting the focus on the injustice of the world.

Ali makes it very clear that he does not want to be seen as a victim and the script eschews any kind of "the lead characters versus the world" simplistic misrerabilism. Yes they have both suffer from belonging to a minority to various degrees but Marius, well meaning but naive, is given a mighty reality check well about the horrors of the world. Dealing with a charity then a UN employee, it is made clear to him that Ali's plight is a drop in an ocean of suffering, with many in an even far worse position than he is.

The way the relationship between Ali and Marius is depicted throughout the script is subtle and complex, making them come across as two very human and realistic characters. After their initial encounter, the scene where they meet in person in Belgrade is expertly set up to defy our expectations, with a wonderful lightness of touch. It is the way of the world that these two men both want something from each other, be it some help to better their situation or some carnal promises but the script is carefully written so that it never comes across as either naive or cynically transactional. There is some mutual curiosity and affection that develops organically, more than either of them had anticipated.

Marius first comes across as self-centred and slightly arrogant, with a hollow life filled with purposely short term encounters and material gratification, hiding a gap of loneliness at his heart, one that is exposed as a family tragedy strikes. Eimutis Kvosciauskas is touching as he allows his vulnerability to slowly emerge throughout, just enough to make his character involving. Ali is a bit of an enigma despite his honesty and Dogac Yilkiz's performance brings his underlying inner conflict and dramatic development to life with restraint and talent.

Romas Zabarauskas has an acute visual flair and his compositions are impressive, with the contrast between Marius's designer but sterile flat and some corporate offices against the still scarred and grey, brutalist landscape of Belgrade, with the spare but arresting use of neon light (a shot of the two men under a bridge in Belgrade with a stark red light is impressive). The melancholic score throughout perfectly compliments the mood of the film.

The Lawyer is quietly affecting and assured drama/romance about two broken souls.

The Lawyer is out in digital platforms on the 26th of February.