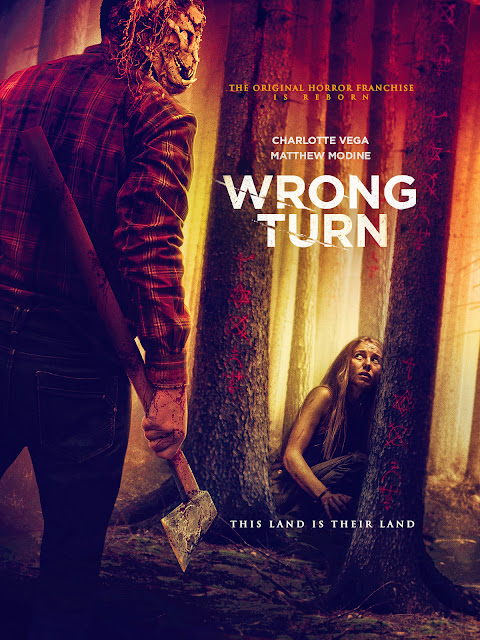 In Wrong Turn, a group of teenage friends is hiking the Appalachian trail when their idyllic trip turns into a nightmare as they find themselves stalked and hunted by unseen assailants. As their situation becomes more and more desperate, their fight for survival forces them to challenge and reconsider their moral values.

In the mid 2000s, horror classics remakes were all the rage, with The Texas Chainsaw Massacre (2003), Amityville (2005), Friday the 13th (2009) and a few others of variable quality. Among those came Wrong Turn (2003), an original film despite some familiar tropes that became a beloved minor classic, one that spawned five sequels with diminishing returns.

The new Wrong Turn is neither a sequel nor a remake but a reboot. After a prologue, the action is mostly told in a long flashback and at first the story is fairly close to the first film except that the group of teenagers has been transposed to our era thanks to some  signifiers that are a little too obviously signposted without having much narrative weight.

The first act is very satisfying, with some obviously higher production values than your average horror film, some distinctive visuals and with the tension well handled. The first, wince-inducing death is shown in graphic details putting to rest any doubt that it would not follow the trademark intense gore of its source material and soon after we are hit by a simple but mightily effective jump scare.

Then the film takes, well, a wrong turn when the group of survivors encounters the dwellers of the mountains, a community with its own rules and particular justice system. The pace slows down and Wrong Turn becomes a confused political fable, attempting to inject some seriousness and even moral ambiguity in a "both sides" kind of a way, with the reprehensible character of some of the teenagers laid bare, a back to nature ethos and the corruption of modern society on trial. Yet all it manages to do in the process is exude an unpleasant reactionary whiff and strip away all the fun. The script even tries to retcon itself to add some balance to the conflict but it just comes across as poor writing. Wrong Turn does manage to conjure up a grim, nightmarish scene and this all too brief moment of inspiration gives a glimpse of what could have been. The film also perks up again in its fun final scenes but it is too little too late.

Charlotte Vega makes for a compelling final girl but as intriguing it was to see Matthew Modine's name on the cast list when the project was announced, the veteran actor is not given any memorable scenes and just plays the concerned dad rescuing his daughter.

Wrong Turn (2021) should be lauded for its ambition and willingness to stand out from the shadow of the original but it does not quite pull it off and its sudden seriousness is misguided. With its near two hours running time, you end up missing the beautiful simplicity and brutality of Wrong Turn (2003).

Wrong Turn is out on digital platforms on the 26th of February and on DVD/Blu-Ray on the 3rd of May.