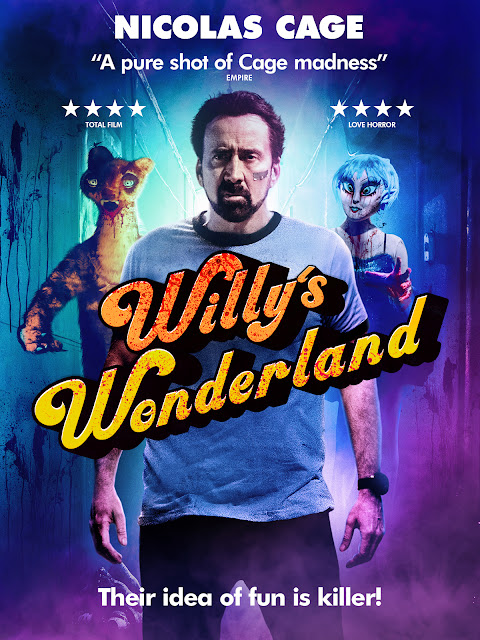 In Willy's Wonderland, a drifter (Nicolas Cage) finds himself stranded with a broken car in a small town. Having to work to repay his debt at the local repair shop, he spends the night cleaning an abandoned family amusement park where the happy mascots suddenly come to life and run amok.

Comparisons between Willy's Wonderland and Five Nights at Freddy's, the iconic horror video game in which a security guard has to survive the night while surrounded by some homicidal animatronics, will be inevitable due to the similarities between their premises. There are also echoes of The Banana Splits (2019), an adaptation that subverted the family friendly TV series and turned its friendly furries into mechanical, murderous monsters. This is where the connection ends however as while that film aimed for a camptastic pop culture satire, Willy's Wonderland plays it mostly straight, surprisingly so for all its assumed silliness. The origin story behind the carnage is also more disturbing and gruesome than just a mechanical malfunction and while there are several funny scenes, Kevin Lewis is skilled enough to not let them derail the darker tone.

The creature design in Willy's Wonderland is absolutely fantastic, each of them has a very different style and personality, some of them seriously unsettling. The film's arresting and inspired visual style add to the unease, from the opening scenes with their dirty yellow tinge straight out of 90s neo-noir to the bulk of the action in the amusement park itself, shot with a distinctive use of colours that could be described as gothic dayglo, not to mention some sporadic flare effects, a style that sets it apart from your run of the mill horror films.

It is a shame then that Willy's Wonderland misses that extra spark that would have truly elevated to the cult status it so clearly aspires to. There is certainly some fun to be had watching the protagonists being chased in the corridors of the haunted park while a laconic Nicolas Cage despatches the assailants with panache. For all the aforementioned qualities however, there is a lack of truly memorable death scenes despite some welcome gore and the film is not as energetic as it should have been especially considering its relatively short running time. For all the uniqueness of each of its robotic animals, ultimately the story feels a little samey with each new kill.

While many recent films have just lazily capitalised on the Cage Rage phenomenon, it is refreshing that Nicolas Cage is able to do something different, delivering a mute and near monolithic performance, punctuated by some random outbursts of violence and with some unusual quirks. His truly bizarre character has a welcome ambiguity that the script never feels the need to explain. The director has stated that a sequel is already planned depending on the reception of this first film and one has to wonder if future storylines might delve more into his background and answer a few questions. Whatever happens, he still serves us couple of scenes that are bound to become iconic and he is probably the only actor who could have looked so effortlessly cool in the process. While the teenage cast is largely slaughter fodder apart from a lively final girl, the ever reliable and amusing Beth Grant is a welcome addition to the cast in a supporting part.

Willy's Wonderland was due to receive a theatrical release last October before moving straight to VOD this month. It is rather unfortunate as while it is an undemanding and reasonably entertaining film, it would have played even better with packed, late night cinema audiences. Perhaps one for the midnight screenings circuit in a few years?

Willy's Wonderland premieres on digital platforms on the 12th of February.