Sundance 2021: Prisoners of the Ghostland by Sion Sono 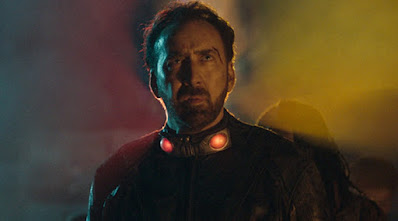 The announcement that Nicolas Cage was going to star in Sion Sono's new film sent some ripples in the cinephile world, a somehow improbable pairing although considering how the American actor has been willing to experiment more and more in his recent career with Mandy and The Colour out of Space, one that was perhaps not all that surprising. The maverick Japanese director suffered a heart attack during the planning of the film which delayed him but did not stop him and the film had its world premiere at Sundance 2021.

In Prisoners of the Ghostland, a bank robber, Hero (Nicolas Cage) is tasked by The Governor (Bill Moseley) to find his missing adopted daughter Bernice (Sofia Boutella) who is said to be in a wasteland populated by ghosts.

Those expecting an action-packed, Cage Rage meme generator will be disappointed. That is not to say that Prisoners of the Ghostland is not a fun film, far from it but it does not feel like it is cynically aiming for artificial cult status, it is both too sincere and, well, too strange for that.

As the film opens it immediately impresses with its world building and its Westerns and samurai films aesthetics, an unlikely combination yet one whose elements blend seamlessly and organically, from the exquisite Japanese settings with red temples and cherry trees to some characters who would not be out of place in a Sergio Leone film.  Sion Sono has indeed stated his fondness of spaghetti westerns and has transposed their codes to his universe without it ever feeling like a pastiche.

As the action shifts to the actual Ghostland, this is where the film becomes even stranger and earnest. Try to imagine if a bomb had exploded during an experimental theatre's workshop and you might get an idea of the visual and acting style, with the directors using a combination of narrative techniques (with some scenes awe-inspiring). Then add some Mad Max 3 meets the infamous last episode of Fassbinder's Berlin Alexanderplatz vibes and you might get an idea.

While audiences should not be policed about what they like, it is a little unfair to only appreciate Nicolas Cage's career through the Cage Rage prism, a facet of his acting that was only amusing because it was an unplanned trademark and slowly went out of control. Here he gives a more soulful and heroic performance. There are still a few memorable line readings and a particular scene will have the audience gasp and laugh, with a leather costume fitted with explosives set to detonate should he display a particular, ahem, emotion, but it is more restrained than when directed by some less gifted directors.

It would not be uncharitable to say that the story is rather incomprehensible, especially the middle act in the ghostland, adding a sometimes confusing commentary about innocenc and redemption, where the spectre and trauma of nuclear war looms large. The film was actually originally supposed to be shot of Mexico but the director's health scare forced the production to move to Japan which adds an unintended yet interesting depth to the script as a result because of its historical heritage.

It is as if scriptwriters Aaron Hendry & Reza Sixo Safai had been bursting with ideas and when not entirely sure what to do with them, decided to add them all to the script, with the director more than happy to run with it. That does not impair the enjoyment however and audiences can just go for the ride, admiring the craft, striking imagery and characters you actually care for. Prisoners of the Ghostland is a film quite unlike any others before it and one that might prove divisive even within fans of genre cinema.