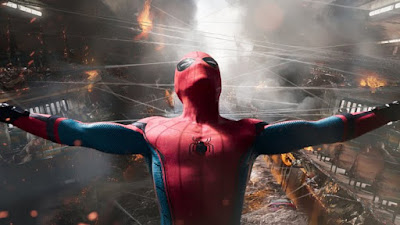 
The double entendre title of the new Spider-Man film, Spider-Man: Homecoming, speaks to the film taking Peter back to his teenage roots as well as Spider-Man returning to Disney/Marvel (previously owned by Sony). The newest web-slinger is Tom Holland (seen in Civil War). His interpretation of Peter has a naive, but earnest enthusiasm and youthful energy that immediately makes him among the most likable and dimensional characters in the MCU.


Director Jon Watts (Cop Car) is the newest indie director to be given $150 million by Disney. This recent trend of big budget producer driven cinema trades directorial POV for what I call "brand management." I find this approach particularly frustrating in a film that has such a rich character like Peter Parker and is ripe for crafting inventive action sequences. Marvel hasn't fixed its "expensive TV aesthetic" problem, but Homecoming makes it less obvious by creating a sense of place in Queens. The geography and residents give the film a lived-in reality that rarely makes its way into these films. In the opening scenes Peter takes us on a tour through his neighborhood, and while the film doesn't ever return to these peripheral residents that give the film liveliness, it's a solid introduction to Peter's world without having to redo his origin.

Spider-Man: Homecoming has its roots in teen cinema as much as superhero cinema. There's a genuine modernization of John Hughes’ films that works because of the endearing performances from the young, diverse cast. Peter's nerdy pal, Ned (Jacob Batalon), has a surprisingly sizable role that plays well off of Holland's Marty McFly impersonation (he delivers a home run line delivery towards the end that had me in stitches). But stealing the show, and wayyyy underused, is Zendaya (Disney Channel's Shake It Up/Singer) as Michelle, a snarky, deadpan teen who lights up the screen in her much too quick appearances. The high school angle opens a window into Peter Parker that's never been seen on film and gives the film a zap of breezy energy. Between the action scenes, there are these awkward and charming teen moments that I wish had been the focus of this film.

Paralleling — or rather, bogging down — the teen thread is Peter wanting to prove to Tony Stark that he's worthy of being an Avenger. Marvel is so excited they've got their best superhero back that they've overwritten him. There are 6 credited writers on this film. 6. Quips are central to Peter Parker, but there are so many jokes during the action scenes that they become white noise. Stark has also added a computer to Peter's suit that he has conversations with during action. It's an overwritten annoyance and unnecessary expository device that adds more noise to a film that works better in its calm moments. 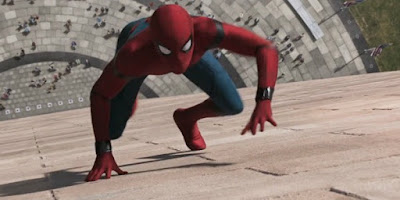 Think of Raimi's films and how he directed the action with crescendos and well-timed one-liners. None of that grace and patience is found here. The writers throw as many jokes at the wall as they can and Watts directs the action in standard medium and wide shots without purpose or visual flare. In the third act there's a tense scene in a car that stands out because the filmmakers thought about where to put the camera and how it would affect the audience.

Marvel has, for better and worse, skipped over Spider-Man's origin. What's compelling about Peter Parker is that he's haunted by his uncle's death and inspired by his final words: "With great power comes great responsibility." Raimi's Spider-Man and Spider-Man 2 echo this through all of the character relationships and it defines Peter. There's a psychological complexity to him not found in Marvel's other heroes. Homecoming leaves such internal dilemmas untapped and tells a traditional coming of age story about a boy without a father figure. It's a different angle that doesn't evoke the raw emotions of Raimi's films, but it's not a bad job for a sixth film and third reboot of this character.

In the opening of the film Jon Favreau's Happy is taking Peter around the world but has little interest in being more than being a chaperone to him. Stark's brief cameos are insurance for a big opening weekend$$$$, but he also functions as a father who's not there for Peter. By far the most notable and memorable father figure is Michael Keaton as Adrian Toomes, a discontent blue-collar worker who turns to supervillainery and becomes the Vulture. Toomes is on the opposite end of the spectrum from Stark's negligence by being a father that supports his family by cheating an unfair system. There's a sympathetic and political element to Toomes' disillusionment that is disappointingly left unexplored in favor of uninvolving action. This is a film that briefly touches on interesting ideas but doesn't explore them beyond dialogue. Peter's search for a surrogate father, and how that affects him coming of age, is the closest this film comes to being about something.

Instead of Peter designing the suit on his own he gets all of his gadgets from Stark, which initially robs Peter from the ingenuity he's know for, but Homecoming smartly subverts the origin tale. Amidst the Avengers subplot and action there's a deterioration of the hero we think this guy is because he is already called Spider-Man. This deterioration intertwines with the story's coming of age roots.

Homecoming sets up and removes all of the central scenes you'd find in a John Hughes film. Peter goes to a party, but there's no chasing after girls or drinking or getting into hijinks. He instead runs off to be Spider-Man because he thinks that it's his duty. While Peter faces off with Vulture on a ferry — in a scene reminiscent of Spider-Man 2's iconic train sequence — Peter appears to heroically save the civilians, but he fails because isn't really Spider-Man. Peter walks into the Homecoming dance like he's walked into Sixteen Candles, but he leaves because he has responsibilities. The film doesn't luxuriate in the pleasures of teen films because its hero has been forced to grow up. By starting with him as the hero, Peter learns on his own that with great power comes great responsibility. This is a coming of age movie where a man becomes a boy again.

These subversions make Homecoming interesting, but it's hard to ignore that there are too many cooks in the kitchen and the filmmaking is blandly anonymous. What makes it a solid effort are the performances — particularly from Peter's teen friends — that give it a youthful energy. Imagine if this film never referenced The Avengers or had unnecessary exposition or that extra action scene and instead spent that time with Aunt May (Tomei is excellent in her brief scenes), Vulture, and Peter in high school; it'd have a chance at being Marvel's best.

That Marvel has created a giant universe of diverse heroes is impressive, but they've done it at the cost of story. Their films are episodic entries more concerned with what's next rather than what the current story is. Since The Avengers (the apex of their model) there have been diminishing returns with the occasional surprise (The Winter Soldier, Guardians of the Galaxy). Homecoming suffers from the same franchise-building problems as other Marvel films, but it's taking place in a small corner of the their universe that's removed enough for the problems to not bog it down. Marvel's new issue of its best hero is a lighthearted adventure that subverts the coming of age genre and has a deep bench of likable performances. There's a lot of room for improvement, but the groundwork here is more sturdy and interesting than the rest of Marvel's solo films.

Out in general release worldwide.