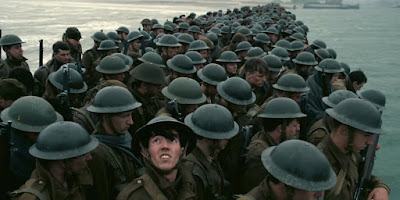 "You can practically see it."

This line spoken from Kenneth Branagh's Commander Bolton in Christopher Nolan's new avant-garde war epic, Dunkirk, would fit perfectly in the dream levels of Inception, or the metaphysical maze of Interstellar, or the streets of Gotham in The Dark Knight trilogy, or the magical labyrinth of The Prestige, or in the fading memories of Memento. Nolan's films, for all of their spectacle, rigorous mazes, and epic vistas, are anchored by a profound yearning to return home. In Dunkirk, it's 400,000 men stuck on a beach in France with the enemy surrounding them. German soldiers loom behind the city, their planes drop bombs on trapped soldiers, and their submarines lurk beneath waiting to sink Britain's destroyer ships. Home is just 26 miles away but paradoxically there's no way of getting there. Hope fades as they wait for a miracle.


In the opening moments of Nolan's films there is an immense feeling of something being lost. That's no different here as nearly every moment of Nolan's experiential war odyssey has an apocalyptic atmosphere of something slowly being suffocated and taken away by an unseen force. The opening title cards refer to this unseen force as "the enemy" (Nazis), but if you care to stare deeper into the film's abyss you might find this unseen force to be something more elemental and abstract. What's being lost is obviously lives (a few deaths are as haunting as any I've ever seen), but woven into Dunkirk's sweeping labyrinth of brutal, Hitchcockian suspense is a deterioration of something primal and delicate: a candid sense of humanism.

Nolan's obsession with time — thematically and narratively (rivaled only by Andrei Tarkovsky) — hits a crescendo in Dunkirk. He's taken an arthouse approach to this story with three different narrative vantage points that take place on different timelines. On land, one week; on the sea, one day; and in the air, one hour. The film presents these weaving tales understandably; however, Nolan demands you pay careful attention and rewards you if you do.

This is a big ensemble playing seemingly nameless characters (everyone is excellent), but the main soldier we follow through the event is Tommy (newcomer Fionn Whitehead), a teenager whose group was shot by the enemy. The camera closes in on him as walks out to the beach and there's a sense that any one of these men could've been the lead character, but Tommy — as in a "Tommy soldier" — was the one randomly chosen. Early on, Harry Styles' Alex teams up with Tommy and a French soldier named Gibson (Aneurin Barnard) as they try to maneuver their way off the beach. In the air is a duo of Spitfire pilots: Tom Hardy's Farrier and newcomer Jack Lowden as Collins. On the sea is Mark Rylance giving the film's best performance as Dawson, a noble father who, along with his teen son Peter (Tom Glynn-Carney) and their young family friend, George (Barry Keoghan), sets sail for Dunkirk and represents the courage of the civilians who risked their lives. These timelines are intercut together while a clock constantly ticks in the background. Hans Zimmer's score harmoniously merges with the pulverizing sound design and echoes the beating of a heart. Nolan has created a symphony of impressionistic cinema with suspense and anxiety at every moment. It's the most experimental and radical Hollywood film in ages.

Often overlooked, and hidden, in the cinema of Christopher Nolan is his obsession with trying to understand the unknown (the universe, reality, time, existence/lack of God) through rational means. Dunkirk's three stripped down narratives are based in elemental forces. Earth, air, and water are where its three stories take place, and fire is present as the element of death. Through the objective, elemental structure Nolan searches for subjective truth by highlighting the senses of the characters. Sight, sound, touch, and in turn the lack of and misinterpretation of these senses, are vital to the character’s experience of this event.

Nolan and cinematographer Hoyte van Hoytema observe these anonymous men with a god-like omniscience and zoom in on their faces to create a Kuleshov effect. Dunkirk is a "post-character" epic. The men we follow have no backstories and speak little dialogue (I can’t think of a modern movie with better facial acting). We empathize because of their situation and how much is at stake. Constantly felt is a tension that any one of the men we're following could die. When we see soldiers drowning it's painful because they're no different from the young men that we're with. Hoytema shoots the endless beach as an abyss-like landscape that evokes a terrifying loneliness. Lend yourself over to the film’s textures and impressionism and you’ll find its rhythms overwhelmingly moving. This is an enormously ambitious film not about one single character or group, but the scope of the event itself; THAT is the main character.

All of this ambition, scale, and tactile expression of sound and image represents humanity quarreling with mortality, the elements to which we're bound, and which we hope to transcend. Dunkirk interacts texturally, thematically, and narratively with these ideas more directly than any film he's made since Memento. You feel like you're there on the beach with the waves crashing against you; you can hear the whistling of wind; you can nearly feel the abyss of the sea. It's the rare Hollywood film where everything you see and hear is jaw-droppingly real, and that's because it is. The camera is actually on the planes as they glide through the clouds (undoubtedly the greatest dogfights ever put to film), the ships are really sinking, and the planes are actually crashing. All of this dedication to reality adds up to an astounding accomplishment where we're not just watching this story, we're immersed into this event and following these soldiers like we're one of them.

The three narratives initially weave together with a disorienting impressionism (later viewings will be clearer). Early on I wondered if this was justified, but it slowly becomes clear that Nolan is patiently building suspense and emotion on a macro level while creating micro moments of suspense throughout these three narratives that eventually coalesce. Will these soldiers escape a sinking ship? Can a pilot shoot down an enemy plane before it drops a bomb? Will he run out of fuel? Will the enemy find a group of British soldiers hiding? These are situations of nail-biting suspense, but it's not just physical tension here, there's also moral and emotional tension as character's decisions reverberate into the other narratives and affect characters that never even meet each other. Nolan miraculously conveys through his bold structure how acts of courage can transcend temporality. If Dunkirk is lost, the Nazis likely control Europe. This micro moment in mankind's history takes on a monumental importance when presented on such a grand scale.

Nolan has carved out a stone cold masterpiece of war as distinct to him as Apocalypse Now was to Coppola and The Thin Red Line was to Malick. The inspirations for this film go back all the way to the silent era of filmmaking with All Quiet on the Western Front and the films of Stroheim and Murnau. Duty, bravery, sacrifice and cowardice are explored almost entirely visually through small moments that strip down humanity to its most elemental level. This is a war film devoid of jingoism and doesn't shy away from showing the frailty of humans when survival is their only goal.

Dunkirk is a gargantuan epic with thrilling action, but its greatest achievement is making us aware how small acts of courage and selflessness come at great costs to make good triumphant over evil. In the third act there's an eruption of humanist emotion as moving and profound as any film I've seen. Come for the suspense but stay for moments like the look on Bolton's face as he stares into the sky at an incoming enemy bomber, or Aneurin Barnard's Gibson trying to prove himself to the British soldiers, or Rylance's Dawson explaining to Cillian Murphy's soldier why they have to go to Dunkirk.

After first viewing I prefer several Nolan films to this one, but I don't know that he's ever made a film as impressive as THIS, and now that I think of it, I don't know that anyone else has made, or could make, a film like Dunkirk. His best films feel like the work of a magician and have a "how did he do that" majesty to them. To quote The Prestige: "it's very rare to see real magic," but the event of Dunkirk, and how Nolan has presented it to us, is just that.

Dunkirk was a military failure that was spun into Britain's most inspiring victory. In classic Nolan fashion, reality is whatever we believe it is. Towards the end of the film, and I’ll be vague here, Nolan's elemental observance of these men reaches an almost spiritual significance with two images juxtaposed against each other impressionistically defining how these individual tales take on a colossal importance when observed through the sea of time.

War reveals mankind's deepest selves, exemplified in different versions by each of Nolan's characters. To come so close to death, and then to triumphantly reach the other side, is a paradoxical victory of existential worth. Death is certain for all, but fighting together against that inevitable force allows us to rage on forever.

Out on general release now