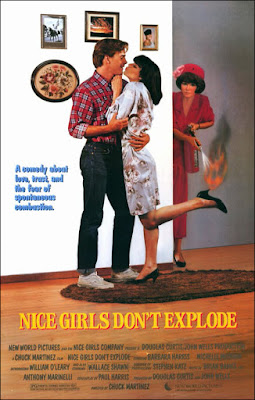 April (Michelle Meyrink) is 18 and she wants to start dating, like a normal girl. Unfortunately she's not a normal girl; when she gets excited, especially around boys, fires break out around her. This becomes a serious issue when her childhood sweetheart Andy (William O'Leary) comes back into the picture and begins to suspect that April's condition may have more to do with her mother (Barbara Harris) than any actual problem.

You could spend years trying to see as many 80s teen movies as possible (trust me, I have) and still only scratch the surface. This seems to have attracted only minimal notice at the time, and it's just fallen through the cracks rather than building a cult following in the years since it was released.

Let's start with that title, shall we? I love titles, a good one can get me into a cinema all by itself, a bad one can put me off a film just as easily. When I first saw this title I immediately went searching for the film. With a title as offbeat and original as Nice Girls Don't Explode, how could it fail to be at least interesting?

Nice Girls Don't Explode isn't a great fim, but it's an intriguing oddity in the 80's teen movie cycle. The presence of Barbara Harris, best known to modern audiences as the mother in the 1976 version of Freaky Friday, is interesting given the way the film mixes tones. At heart it seems like a live action Disney movie. The jokes are silly, even when they get a little raunchier and the premise of the fire girl is so ludicrous as to be out of a fairy tale. On the other hand, once it is revealed, early on, that Andy is right, April is in fact not a fire girl and that her mother is setting and triggering the fires to keep her daughter from dating, the film becomes something altogether stranger; imagine the Disney Channel remake of Firestarter. It's a weird mix, because Harris' character is, by almost any definition, a psychopath; she manipulates her daughter, causes untold damage to property and psychological damage to April, but the film plays it for laughs and largely walks that tightrope well.

The gags are silly and clearly pitched to a young audience, but that's not to say they don't hit. My first big laugh came before we know that April is being manipulated. She's off on her first date in ages and her mother asks if she's packed protection, at which point April picks up a mini fire extinguisher. It's that joke and other little non-sequiters like it that are often the film's best moments. Another especially funny little moment comes when, after a date with Andy, April is dropped off at her house by a fire engine, as if they are well aware where she lives.


The tone is odd, but in the leads Barbara Harris and Michelle Meyrink find the right balance. Harris is clearly having a ball playing on the idea of a sociopathic sitcom mom. One wonderful scene has her making plastic explosives in much the way you would usually see a character like this baking cookies (which she also does frequently). The contrast between her very proper exterior and what she's doing to her daughter is often very funny. Michelle Meyrink only made a handful of films, stepping away from acting in 1989 when she became interested in Zen Buddhism. That's a pity, because she was an engagingly offbeat presence in 80s teen movies like Revenge of the Nerds, Real Genius and this film. It would be easy just to make April silly and quirky, but what Meyrink captures that is deeper is the degree to which April's thinking has been affected by her mother, even late in the film, as the justifications get more and more ludicrous and Andy ever more incredulous, we can still see April being taken in by what her mother says. It's funny, but Meyrink doesn't forget that it's also sad and disturbing just under the surface.

There are things that don't work here. Chuck Martinez' direction is pedestrian at best and Wallace Shawn grates in a supporting role as an arsonist who falls for April. The big problem though is William O'Leary as Andy. O'Leary, in his first role, hasn't developed a natural comic rhythm. He goes a bit hard for the cartoony elements of the script and the chemistry isn't really there with Meyrink.

Still, Nice Girls Don't Explode is well worth 78 minutes of your time. It will almost certainly make you laugh, and I promise you, you've never seen anything quite like it. How many films can you say that about?

UK and US DVDs are available. I hope the US copy is better, as the UK release one of the worst transfers I've seen; it may as well be a straight rip from VHS. The 4:3 picture doesn't even appear to have been panned and scanned, instead it seems that the sides have simply been chopped off to fit the frame, the occasional missing joke be damned.
at 21:53