A Change In The Weather by Jon Sanders 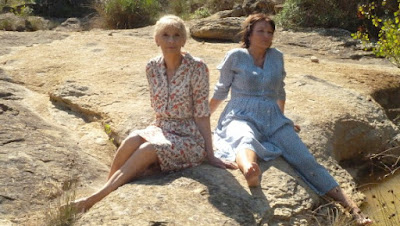 Set in the heart of the French Cathar region, and directed by Jon Sanders (Back to the Garden, Painted Angels), A Change in The Weather is a rather curious little production which mixes improvised as well as rehearsed material to depict the complicated relationships between its deeply flawed protagonists. Featuring Sanders’ longtime collaborators Anna Mottram and Bob Goody as well as German actress and singer Meret Becker, the film makes a decent enough attempt at philosophising the intricacies of a failed relationship between two people who still care deeply about each other. With a realistic dialogue and fairly organic performances, A Change In The Weather manages to convey the devastation felt by the loss of love and intimacy, but is ultimately let down by a an overly wordy screenplay and theatrical style.

In an tempt to inject a bit of life into what looks like a failing marriage, theatre director Dan (Bob Goody)and his wife Lydia (Anna Mottram) move a group of actors to their holiday home in France to rehearse a new project which seemingly mirrors the couple’s own lives and experiences. The play in the film which revolves around a couple of similar ages, named Bernard and Elsa are played by different actors at different stages of the real couple’s lives. This device allows the audience to delve into what is left unsaid by Dan and Lydia, uncertainties and insecurities are brought to the surfaces leaving nobody under any doubt about their troubles.

Sanders uses the French countryside and its rural isolation to his advantage by managing to convey a sense of dejection and loss of intimacy between two people who can no longer be honest with each other. The performances, although commendable, are at times a little too theatrical and can leave those less familiar with this medium at little puzzled.

On the whole, A Change In The Weather is an ambitious undertaking by a highly capable team, but if you are unwilling to go with the story, you might find yourself a little dismayed by its dialogue and unnecessarily lengthy two-handers. Having said that, Sanders should be commended on his uncompromising work ethic, which is impressive regardless of what you think of his movie. Perhaps not a film for everyone, but those who know and love Sanders will rushing to catch this.