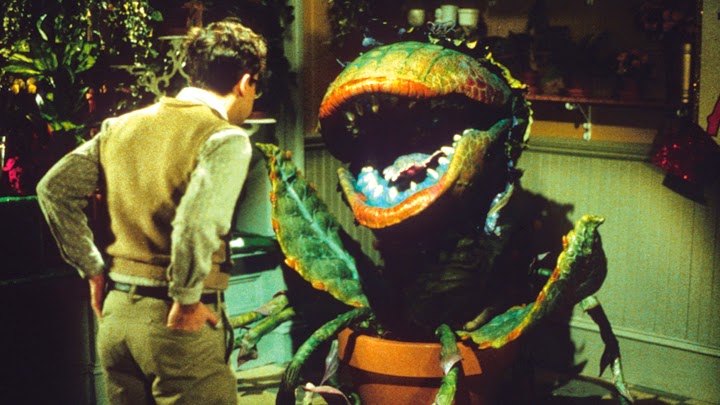 Inspired by the monster movie directed by Roger Corman, a production he famously completed in 2 days, and based directly on the successful off-Broadway rock musical, Frank Oz’s 1986 horror comedy occupies a rare position in pop culture as both a mainstream movie and a cult item.

Headlined by Rick Moranis, Ellen Greene and Vincent Gardenia – with a memorable supporting role for Steve Martin (credited as ‘Special Appearance by’) – Little Shop of Horrors had genuine crossover appeal, both as a musical and tale of the macabre. Perhaps unusually, given the subversive elements of the plot and its farce-like premise, kids embraced the film and found much to enjoy. After all, a giant plant that talks and eats people is an amusing concept. The risqué jokes and mild cursing pitched the film at an acceptable level even if, on closer inspection, the material is occasionally inappropriate and more than a bit weird.

Little Shop of Horrors was a moderate success when released in cinemas in 1986, but a large part of its global popularity was due to subsequent VHS sales. Not only that, Frank Oz was canny enough to include high profile cameos. 1980s comedy god turned indie darling, Bill Murray, reprised a role played by Jack Nicholson in Corman’s original (a character absent from the musical). Murray’s slightly effeminate masochist – who swoons at the thought of receiving a root canal with no anaesthetic from Steve Martin’s macho, sadist dentist, Orin Scrivello – and yelling out ‘Candy bar! Candy bar!’ – crackles with perversity. Elsewhere, John Candy is Wink Wilkinson, a madcap radio DJ interviewing Seymour (Moranis). Improv king Christopher Guest briefly appears as a customer at Mr. Mushnik’s flower shop and British actress, Miriam Margoyles, cameos as the dental nurse in Scivello’s surgery. In the theatrically released cut, James Belushi starred as the executive who tempts Seymour with signing away the global marketing rights to mass produce the killer alien planet, Audrey II. Levi Stubbs, of The Four Tops fame, provided the voice of the mean green mother from outer space. 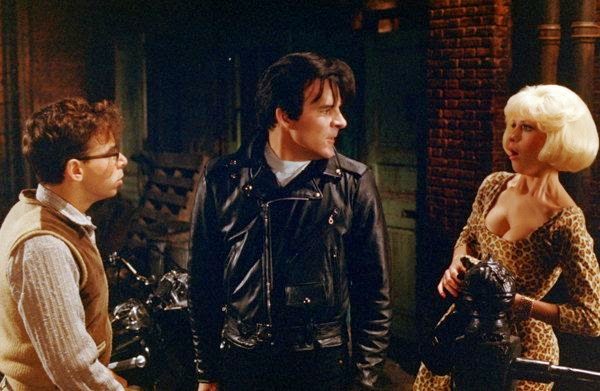 Oz originally followed the theatre show’s plot and crafted an ending that would go on to disturb audiences at test screenings. The perils of this industry tactic (screening movies for the audience and asking them what they liked and didn’t like) has led to countless films being reshot and reworked to up their commercial appeal. Americans do not like sad endings, the old saying goes.

SPOILER WARNING: the ending is discussed in the next paragraph.

In the original version, poor Audrey (Greene) is killed off and fed to the plant. Seymour attempts suicide only then to offer himself to Audrey II to be gobbled up. The alien and his brethren take over the world. Oz lovingly recreates the feel of 1950s monsters movies and Godzilla flicks. It’s a complete downer and the sudden shift and lurch into tragedy is actually quite mad. At considerable expense, Oz was forced by the studio to reshoot a happier ending. That’s the one we saw until 2012, when the Director’s Cut was released.

With its 1960s-style song compositions – including the Phil Spector-like ‘Skid Row’ number – Little Shop of Horrors provided lots of memorable tunes. (Sometimes, musicals forget this key ingredient.) The mixture of rock ‘n’ roll and Motown provided a nice variation as well as an encapsulation of popular American music of that era. The ballad ‘Somewhere That’s Green’ is pure subversive satire. Audrey, a ditzy but good-hearted working class gal, often viciously beaten by her doctor boyfriend – the film’s domestic abuse subplot is highly disturbing for what is a garish genre movie – daydreams of a life that many would consider to be a cookie cutter suburban nightmare. It’s both endearing – because it really is her American dream – but also taps into the bland and uniform post-WW2 consumerist society that would lead to George A. Romero’s Dawn of the Dead (1978).

Steve Martin’s drug addict dentist, who gets to sing about the joys of his work in a barnstorming set-piece, is a hoot and without a doubt a major highlight of the film. But, again, his character, while making you laugh, is an absolute sadistic piece of s**t. ‘Who wants their teeth done by the Marquis De Sade?’ the backing singers note in the brilliant ‘Dentist’ number. And as previously mentioned, Martin’s scene with Bill Murray, is a bizarre piece of comedy to put in a mainstream picture.

Unlike many cult pictures, Little Shop of Horrors did not need time to find an audience. So how ‘cult’ is it? Its credentials stem more from the fact that it’s a delightfully weird piece of work for something with popular appeal. A plant that feeds on human blood, drug addiction, domestic abuse, social satire, sadism, masochism and murder are not exactly common-or-garden themes found in movies aimed at all ages. For that, Little Shop of Horrors should be applauded as a truly subversive, misfit film.

Little Shop of Horrors is screening at the BFI on the 25th and 26th of February 15 at the British Film Institute in London as part of their Cult Strand. For more information and to buy tickets, click here