Tom At The Farm Review 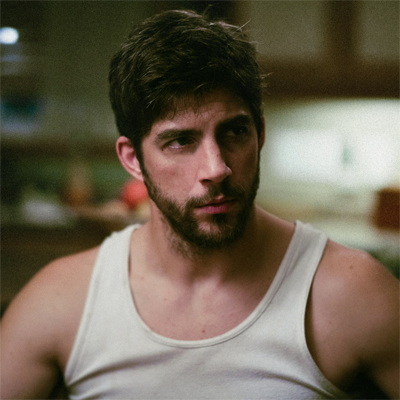 French-Canadian boy wonder Xavier Dolan’s latest picture, Tom at the Farm, based on a play by Michel Marc Bouchard, draws suspense and high tension from a clash between dilemma and desire.

Tom (Dolan) makes a trip to his recently deceased boyfriend’s home, out in the sticks. His unannounced arrival is a delicate matter. The family, it appears, are unaware the son was gay. The mother welcomes the visitor with open arms – even inviting the lad to stay in the deceased son’s bedroom – but Tom is shaken by Francis (Pierre-Yves Cardinal), the older brother of Guillaume, who’s brooding intensity and dangerous physical strength both captivates and unnerves the city slicker. He stays for a few days, but the mother and son’s hospitality is akin to being locked in the family crypt. At Francis’s behest (and threats), Tom is forced to tell lies about the relationship with Guillaume, so as not to upset Agathe (Lise Roy), the mother, even further.

First up, the title. Tom at the Farm sounds cheery and inviting. But it’s not a movie about a young man having a swell time mucking the stables, learning to drive a tractor, tilling the land, growing crops and being accepted. That’s for another film entirely. Here, love and bereavement are smothering, torturous forces and potentially the ignition key to enflame violent impulses. Abandonment and fear of abandonment runs through Dolan’s film like an electrical charge. Honestly, I spent most of the movie’s running time wishing Tom would leg it from the farm at the first available opportunity. In fact, when he does decide to do one, Francis removes the wheels off his car, takes the worried lad out for brewskis and proceeds to strangle him in a way that screams ‘kinky S&M scenario!’

Pierre-Yves Cardinal, as the volatile farmer who takes a shine to his bro’s ex, that’s when he’s not beating him up or forcing him to tango in the barn (that’s not a euphemism, he literally makes him dance), is the star of the movie. He exudes a mixture of menace, danger and melancholy. The autumnal landscapes and sepulchral silences intensify further the peculiar drama unfolding. Dolan has crafted a malignant atmosphere to rival the masters of horror and suspense cinema.

Blu-ray extras are very slim to the point of non-existent. The original theatrical trailer is included and that’s your lot. A commentary track would have been most welcome.