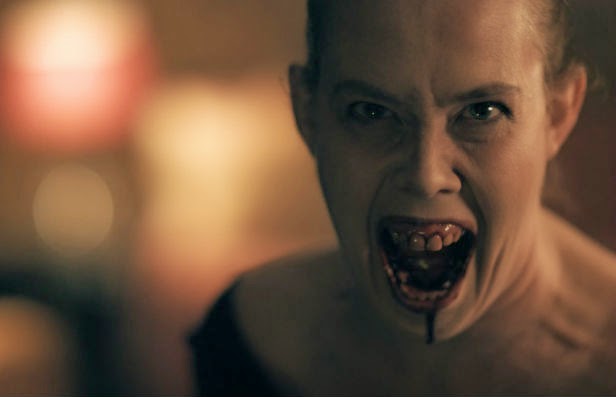 "I have thoughts and feelings that aren't mine," says Jordyn (Ana Paula Redding), the confused heroine of Jason Bognacki's Another. "I wake up in strange places and I can't remember how I got there." Jordyn's sense of extreme disorientation is perfectly reproduced in the viewer too as this sequence flows into that and one location bleeds into the next, with little adherence to the norms of spatiotemporal continuity. The film's unconventional editing engenders a world that feels slippery and oneiric, with little to anchor events to actuality - and even a mundane conversation between Jordyn and her nightshift colleague John (Michael St Michaels) is cut up in a jittery, mannered fashion that drips with neurotic unease. Here the irrational rules, dreams dominate, and a young woman's contemporary life takes on the forms of both fairytale (chiefly Snow White) and ancient rite (of passage), with the canted angles and stylised sets just adding to the off-kilter nature of this film's reality.


In the middle of orphaned Jordyn's 18th birthday party, after she makes a wish to find her real parents, her adoptive Aunt Ruth (Nancy Wolfe) suddenly declares, "It is time! It is time!", and stabs herself in the chest with the cake knife. Ruth survives, but from this moment on, Jordyn starts having odd hallucinatory experiences - which her aunt will eventually explain as an attempt by Jordyn's demon mother (Maria Olsen) to infiltrate Jordyn's life and take over her youth. What follows is a trippy tale of supernatural possession, diabolical bodysnatching and witchy vampirism - all of which also doubles as an allegory of a girl's traumatic metamorphosis into womanhood and assumption of her genetic legacy. If Jordyn is merging with an irresistible other inside her, she is also, more or less literally, becoming her mother. And what could be more alienating and confounding than adolescence?

The plot of Another is as disposable as the increasingly lengthy outbreaks of exposition from Ruth. For Bognacki's hyperreal construction is less a chamber designed to house solid story than a hall of mirrors, with the elegant, Audrey Hepburn-like Redding playing both "the fairest one of all" and her darker reflection. Beauty - a recurrent word in the film - is also a key characteristic of the mise en scène, where, despite the low budget, everything is so exquisitely dressed and immaculately framed that almost any still from the film could be hung in a gallery. Like Amer (2009), Beyond the Black Rainbow (2010) and The Strange Colour of Your Body's Tears (2013) before it, Another is an aesthete's idiosyncratic take on genre, suited as much to the arthouse as to the grindhouse (let alone charnelhouse), and achieving a transcendent brand of uncanny that comes less from the impressionistic, abstract narrative than from the unnerving distortions of its telling.

For some years now, there has been talk of a remake of Suspiria (1977), Dario Argento's baroque, bewitching masterwork of supernatural style over substance. Sharing many of that film's moods and motifs, and explicitly acknowledging Argento in its closing credits, Another turns out not to be the Suspiria rip-off that horror fans have been dreading, but a dynamic reimagining better than anything in their wildest dreams. Bognacki has well and truly arrived as a distinctive new voice in genre, giving us thoughts and feelings that seem entirely alien.