Deliver Us From Evil Review 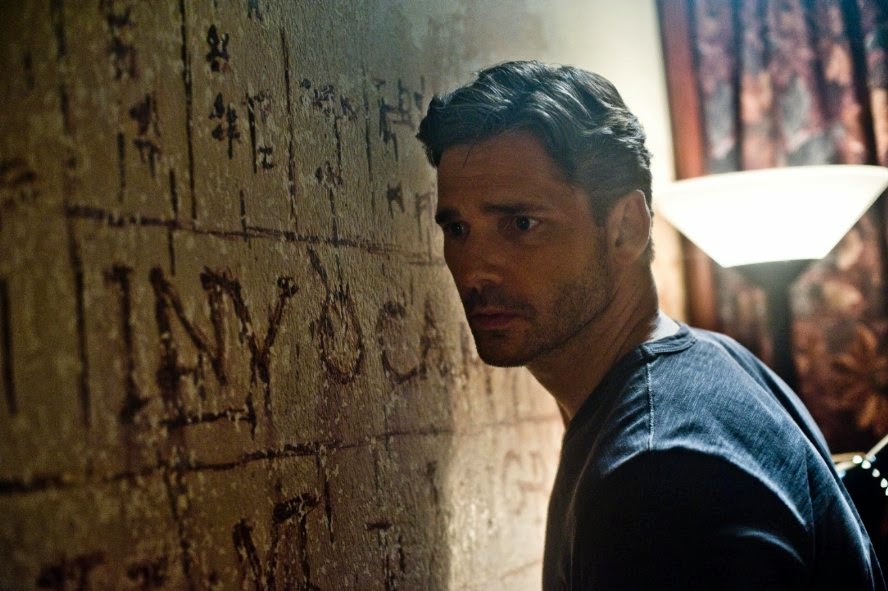 Claims to veridicality are a cliché of horror, and for those already playing the game they are as clear an advertisement of fiction as 'once upon a time.' Still, even the most gullible of viewers would do well, when they read the words 'inspired by true events' that open Scott Derrickson's Deliver Us From Evil, to remember that his last similar film to have opened with a similar claim, 2005's The Exorcism of Emily Rose, validates a priest who, in the real story on which the film is super-loosely based, in fact through overzealous credulity exorcised to death a young girl whom even a Commission of the German Bishops' Conference subsequently ruled was never possessed in the first place. So caveat emptor, for here the devil is truly in the details.


With the subversive exception of Daniel Stamm's The Last Exorcism (2010), which exposes the confidence trick it so skilfully pulls on us, films about exorcism tend to conflate a willing suspension of disbelief with a leap of faith, hoping to make believers of us all. As such, they use the monsters and demons of the horror genre to terrorise viewers into buying Christian ideology wholesale. As its very title implies, Deliver Us From Evil is no exception, teaming up grizzled ex-Catholic cop Ralph Sarchie (Eric Bana) with ex-junkie priest Mendoza (Édgar Ramirez) to face a strange triumvirate of possessed war veterans who are at the centre of Satanic events in the Bronx. Given that the script has been drawn from the real Sarchie's own book about his adventures in paranormal investigation and demonology, Beware the Night (2001), it is no spoiler to say that he survives, and returns to the faith he has abandoned - although one hopes that if he had truly committed an act of cold-blooded murder as he does here, it would take more than mere priestly absolution for him to be redeemed in the eyes of society. In the real world, a lengthy prison sentence might be more probable, not to mention proper.

In a New York where it never seems to stop raining, it is Sarchie's gift, and also his curse, to have a super Spidey sense for evil - something that his partner Butler (Joel McHale) calls his 'radar'. This draws him into investigating a series of bizarre crimes, all involving mascara-stained Marines, an ancient invocatory inscription (in Persian pictograms and Latin), and songs by The Doors. Yet as Sarchie joins forces with Mendoza and gets closer to the source of all this devilry, the evil itself comes a-knocking - and a-creaking - at Sarchie's home when only his wife (Olivia Munn) and six-year-old daughter (Lulu Wilson) are in. From here on, the film plays by numbers, with all the dodgy lighting fixtures, bumps in the night, contorted bodies and inhuman gutturalisations that we have come to expect in an exorcist movie. This material is delivered efficiently, with excellent sound design, the occasional jump scare and even haunted toys - but there is little here that has not been seen many times before.

Perhaps what is most striking here is the association of Satanism with the Islamic world. Deliver Us From Evil may, like The Exorcist (1973), open in the Iraqi desert - but this locale has acquired a new status post-9/11 that is ripe for a very different kind of demonisation. The devil crosses over to New York only after US soldiers have stumbled upon a desert cave on the turf of Arab insurgents - whereas Sarchie and Mendoza drink together and discuss 'the problem of good' in a pub expressly frequented by those embodiments of America's self-sacrificing resistance to terror, the New York City Fire Department. In other words, here evil comes from the Middle East, but is ultimately dispelled by American goodness, in a mapping of post-millennial geopolitics onto a simplistic Manichaean worldview. Of course, the kind of person who buys this facile nonsense may well also genuinely believe in demons - and fairytales.

Out in the UK on the 20th of August