Only Lovers Left Alive - We Loved It So Much We Reviewed It Twice! 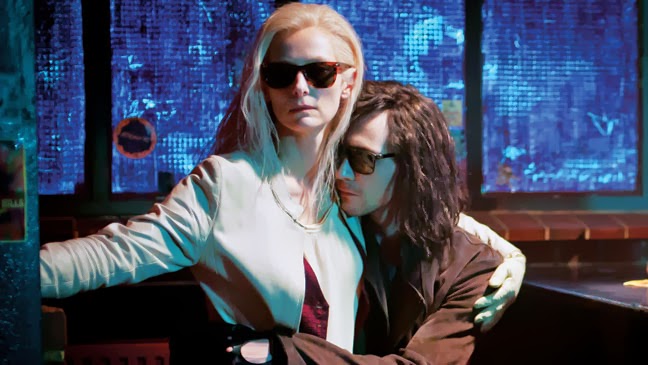 Yes, a second review for Only Lovers Left Alive. Both Laurent and myself loved it so much we thought we would both review it.

One of the benefits of being a vampire, is arguably the extra time one would acquire to really delve into the things that are of interest to you. Writer and director of Only Lovers Left Alive Jim Jarmusch, takes this aspect of the vampire and considers the modern world through the centuries old educated minds of vampires Adam (Tom Hiddleston) and Eve (Tilda Swinton).

As with all vampire stories there is the basics of blood, teeth, men and women. However, the vampires of Only Lovers Left Alive are refined, loving and deeply involved in their own education while displaying a respectful approach to blood, their required nutritious psychedelic drug.


Adam carries the weight of the Romantic mind prone to melancholy. The 'funeral music' he finds himself composing is as if Jeff Buckley (during the Sin é, unsigned period) and Johnny Greenwood from Radiohead created a concept album and as with Adam, quietly released it via YouTube. Tilda Swinton's Eve is the rose-white counter to Adam's over sensibilities with her calm joie de vie and cultivation of all the best aspects of life.

Only Lovers Left Alive could so easily have fallen into pretentiousness and some might well view it as such. However, with the dead pan smoothness of it's in-joke humour and literary references it is both a delicate love story and a sophisticated tongue and cheek consideration of how one can maintain one's humanity while being fully aware of the all too gnawing fundamental needs of survival.

Hiddleston and Swinton are absolutely captivating as equal parts moving within the world, Adam in crumbling Detroit and Eve in Tangiers. There is a quiet utopian love shared between them which is not separated from normalcy of family and friends. Adam's inverted nature battles against the irritants of possible fame with his adoring fan and employee Ian (Anton Yelchin), his blood supplier Dr. Watson (Jeffrey Wright) while also having to contend with Eve's younger 'sister' Ava (Mia Wasikowska) party-girl ways. John Hurt is Christopher Marlowe the writer still alive as a vampire with all the playful literary innuendo about Marlowe and Shakespeare threaded through the film.

Jarmusch applies vampiric touches sparingly, hinting at and inventing vampiric mythology but avoids exposition as we see the world through the vampires understanding eyes. Only Lovers Left Alive is deeply sophisticated to the extent that it does not feel the need to be flashy. The film is layered with content if the viewer wishes to see it while the final shot exalts in the humorous excesses of the vampire genre.