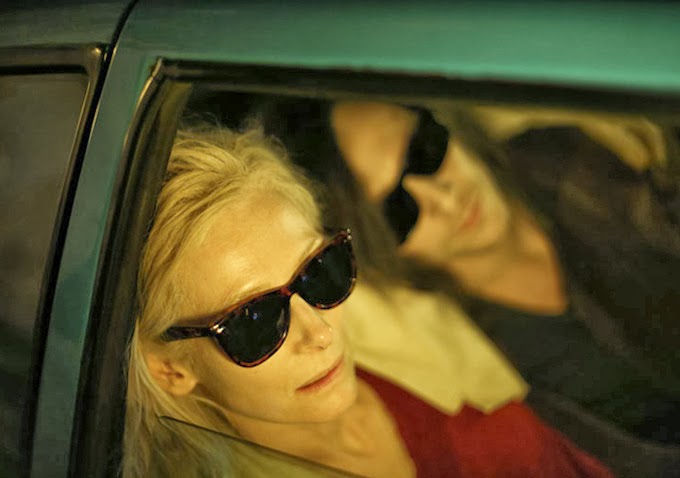 I am a big fan of Jim Jarmush, and despite having seen only a handful of his films (including the fantastic Dead Man, his black & white existential western with Johnny Depp, seen in Cannes back in 1996), I love the way he has remained a true independent director, faithful to his own vision and style. And it is truly fitting that he has finally made a film featuring vampires, considering he is obviously one himself. I mean, have you seen him? Have you ever seen him in the daytime? I thought not. Also, he hasn't aged in three decades.


I particularly loved his latest, The Limits Of Control, with him at his most radical and laconic. Only Lovers Left Alive follows two vampires, Adam (Tom Hiddleston) & Eve (Tilda Swinton), who find their particular way of life threatened with the arrival of Eve's younger and wayward sister, Ava (Mia Wasikowska). And it's wonderful, everything I wanted from it and then some. Coming out of it, my tweet review read out: "A languid and witty rock poem". Of course, you wouldn't expect Jim Jarmush to make an ordinary vampire film, even though he actually incorporates quite a lot of the creatures of the night's usual conventions (his vampires cannot withstand daylight, they drink blood, and can turn others into vampires too).

The pace is measured, the tone witty, the plot rather thin and the indie rock soundtrack as incredible as usual. But I love the way he updates the vampires's coda while retaining some of its classical elements. There is a wonderful romanticism on display in here, not of the naff variety, but the one which sees two millennium old creatures still basking into each other's undying love, while pursuing their thirst for arts and culture, a world in which they hang out with undead playwright Christopher Marlowe (wonderfully played by John Hurt).

They might be aesthetes, but modern ones too, looking like they belong to some lo-fi gothic band, and hanging out in rock bars where you nearly expect them to bump into Miriam & John Blaylock (Catherine Deneuve & David Bowie) from The Hunger, two characters they have a lot in common with, especially with their outfit (even though Tilda Swinton's unconvincing wig looks like a straw hat threw up on her). In fact, Adam is a musician himself, part of a cult band and surrounded with guitars and modern sound equipment.

Jim Jarmush pairs us some unusual locations to the most wonderful results: Tangier and Detroit (and if you do wonder how vampires can travel from one to the other by plane without seeing the daylight, well this issue is tackled with an amusing call from Eve to a travel agent). Both cities look absolutely gorgeous under the director's camera and incredibly evocative. Tangier seems like a more natural choice, given its literary and alternative heritage, but Detroit looks just as ravishing at night, in its urban eeriness of neon lights and deserted streets. Interestingly, the thin plot I described earlier is actually the film's only duff note. Not the fault of Mia Kasiwowska, who is a brilliant actress, but her character of an annoying teenager almost threatens to derail the film, and takes it in an unwelcome direction.

Thankfully, this is only a short part of the film, and it could have done without the need of any real plot development without a problem. Instead, I was quite happy mainly following its two leads, Tilda Swinton & Tom Hiddleston, who have a fantastic chemistry between them, making their millennium old love affair perfectly believable. They quite simply look like they were born to play those characters, which they inhabit with studied nonchalance and otherworldly presence. Deadpan, cultured, atmospheric... Only Lovers Left Alive is a great film which is likely to win Jim Jarmush some new fans.