In Order Of Disappearance Review 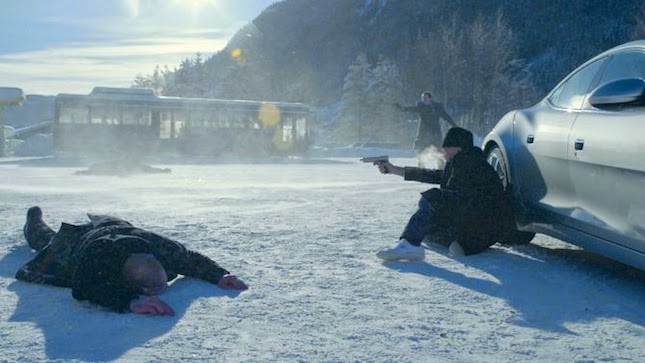 The same week that quiet, diligent snowplow operator Nils (Stellan Skarsgård) receives Citizen of the Year from his local Norwegian town, his son is murdered by a drug cartel. Nils knows his son to have been innocent and just as diligently as he clears the snow for his fellow citizens, he begins to clear a path through the drug organisation that killed him to find out who ultimately gave the order.

This puts him in the sphere of the drug kingpin Ole also known as The Count (Pål Sverre Hagen) a highly strung, beautifully tailored vegan crime boss teetering on the edge of a nervous break down. As the body count increases causing a dent in Ole's staffing ranks, assumptions are made about the source of the saboteur which results in the involvement of a Serbian drug cartel led by a figure known as Papa (Bruno Ganz).


In Order of Disappearance becomes a revenge crime drama with fathers avenging and protecting sons as blood is splattered across the crisp snows of a Norwegian deep Winter. Director Hans Petter Moland has crafted a film that is beautifully balanced between the brutality of visceral bone crushing vengeance and the blackest of dark humour. The sleek lines of Scandinavian design and taste are magnified amongst the winter snows as coffee and carrot juice share screen time with violence and grief. Pål Sverre Hagen chews up the screen as Ole dealing with the irritations of raising a son with a calm and adversarial ex-wife and running a drug business.

Skarsgård's Nils, whose surname of Dickman is used to great effect in the film, is on the other hand, calm and even meditative in his actions while maintaining his humanity within his believable unspoken code of ethics. The Kim Fupz Aakeson script is frequently funny, breaking the tension of the violence and throwing in some delightful curb balls into the life of a drug bosses henchman and the use of pseudonyms. Also, this film could well launch Skarsgård as the next emerging older action hero.

In Order of Disappearance is a smart revenge drama singed with wondrous cold dark humour like a Scandinavian Winter while Skarsgård inhabits a role that, as with Liam Neeson in The Grey, redefines an older actors credentials while retaining all of their emotive dramatic talents.