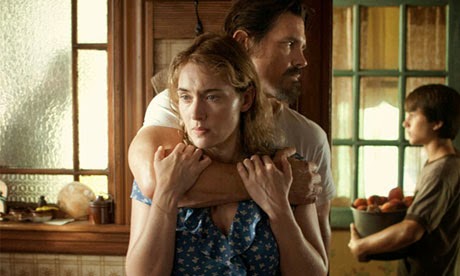 Set in the early 1980s during the late Summer heat of a Labor Day weekend, Adele (Kate Winslet) and her pre-teen son Henry (Gattlin Griffith) return from a simple grocery store visit with escaped convict Frank (Josh Brolin) quietly but firmly taking them hostage. Over the course of the long weekend the significant events in their lives that brought them to become prisoners either physically or mentally are slowly revealed.


Adapting Joyce Maynard's novel, writer/director Jason Reitman creates both a tense and intimate atmosphere within the film, assisted exponentially by the talents of Winslet, Brolin and Griffith. The stifling Summer heat adds to the hot house effect of the situation as the potential danger of an escaped convict is introduced to the dishevelled house and fragile life of Adele.

Both a threat and a comfort, Frank introduces the concept of a male ideal to the household creating the possibility of Adele's restoration and of Henry's coming of age moment. The film lingers on domestic details and a feeling of possibilities in the seemingly mundane. Though primarily focused on the three leads, the film is ably fortified by an accomplished cast with the likes of Brooke Smith as Adele's demanding neighbour Evelyn along with J.K. Simmons as fellow neighbour Mr. Jervis providing insights into how differently lives can be lead in the same street. Clark Gregg as Adele's ex-husband and Henry's father Gerald, adds weight to the assumptions first made at the beginning of the film.

Reitman allows for complexity to be revealed through the most mundane of domesticity creating both a love story and coming of age film. Akin to Clint Eastwood's The Bridges of Madison County (1995) Labor Day is a slow burning film with subdued, masterfully underplayed performances from Winslet and Brolin with both actors avoiding a descension into tripe sentimentality in their performances. Though the film does steer towards a honey dipped apple-pie ending, it still boasts a fine cast and sympathetic look at mental health issues from unacknowledged wounds.