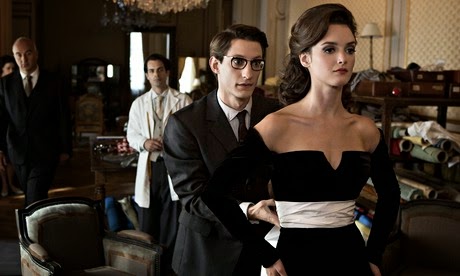 Beginning the film at the very start of fashion designer prodigy Yves Saint Laurent's (Pierre Niney) career with French fashion house Dior in 1957, Yves Saint Laurent tracks the career, designs and private life of the designer through the memories of his long term partner Pierre Bergé (Guillaume Gallienne). Framed by Bergé's sale of their art collection, the film is a biopic brought to life through the iconic muses and designs of YSL during his lifetime.


The personal and business dynamic between YSL and Bergé is shown as both a heart-felt love story and the conflicts that can arise during a long term relationship in a demanding industry such as that of the fashion world. Yves Saint Laurent for the fashion enthusiast does not disappoint with the various muses and phases of YSL's iconic designs filling up every frame of the film.

The film is punctuated by fashion shows immersing the audience in the world of Yves' designs. For those not familiar with the evolution of YSL's style, the film illustrates the importance of his mother and then his three main muses in the evolution of what became a recognisable world wide brand. Victoire, a fashion model at Dior (Charlotte Le Bon) during his earlier work, Betty Catroux (Marie De Villepin) who helped shape the iconic Le Smoking Tux collection in 1966 and Loulou De La Falaise (Laura Smet) who Yves first befriended on the first of his many return trips to Marrakech with Pierre, all brought something fresh to Yves work.

One of the film's particular strengths is showing the impact on the fashion world of Yves from his couture work to the concept of pret-a-porter/ready to wear attainable designer fashion. Niney as Yves, captures the mental frailty and strengths of the designer while convincing in his depiction of such a well photographed fashion icon. The film is undoubtedly stylish, though the script is quite a straight forward, linear biography. The in-built YSL style and Niney and Gallienne's performances as private and business partners through the slings and arrows of Yves and Pierre's lives together make for a compelling biography of a fashion legend.

Interestingly, a second YSL biopic is being released later this year, directed by Bertrand Bonello and starring Gaspard Ulliel. It should be ready for Cannes, and you can bet it will be a lot less straight forward.