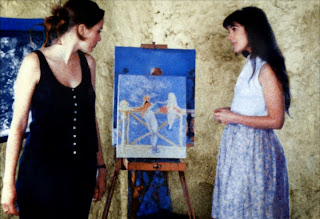 Moving on in a non-chronological order, my second film in the Eric Rohmer Project, Four Adventures Of Reinette & Mirabelle. In it, Reinette, a country girl and painter, meets Mirabelle, a Parisian student by chance on a country road, and the pair instantly strikes a friendship. The film follows them through their various adventures (four in fact, as the titles goes!), first in the country then back in Paris, their stories unwrapping like some modern day fables.


Indeed the title echoes the De La Fontaine fables, and the two leads can be seen as the female counterparts of "Le Rat Des Champs & Le Rat Des Villes", pitting a more honest and straightforward country life against the vicissitudes and compromises of the city. And their contrasting sensibilities, due to their very different origins, give them a conflicting take on the situations they come across, in which the value and even purpose of honesty is tested and questioned.

In some ways, this is the Eric Rohmer we know and love: the dichotomy between the city and the country, the quintessential young French women, with their discreet beauty and verbose musings on life... And the celebration of an unusual natural event, here the "blue hour" echoes the green ray of the eponymous film.

But there is also a different side of the director which I have not seen before. As much as I love him, the visual aspect of his films never seem to have been his overriding priority, yet there are some lovely composed scenes here: a red dress matching a field of poppies, night skies of an incredible shade just before dawn during that blue hour... And there is a solid dose of humour here. One of the adventures features the rudest Parisian "garcon" in the history of films (and yet still a few notches below the real deal), and turns into an almost surreal farce, showing the director at its most playful. Another has Fabrice Luchini in a hilarious turn (yet slightly muted compared to the caricature he has since become) as a rather dishonest art gallery owner.

It is probably a minor film of his (but only considering the exceptional quality of the rest of his work) but his unmistakable style is prominent, which sees him adopting a seemingly light of touch to brace some profound moral issues.
at 22:33