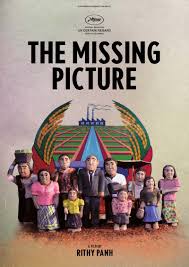 Adapted from the autobiographical novel 'The Elimination', by Rithy Panh and winner Un Certain Regard Prize, at Cannes 2013, L'Image Manquante 'The Missing Picture', is a unique and inspiring film. Panh was 11 years old when Pol Pot's communist regime overtook the Cambodian capital in 1975. His family was considered bourgeois (his father was a teacher), and they were sent to a labour camp, where torture,  executions and hunger dominated.

Told via the use of black and white photos, and news footage from the time of the invasion, this is then contrasted with the simplistic and colorfully carved clay figurines that represent the people of Cambodia and Panh's family. Narrated in French by Randal Douc, whilst we witness the making of the figures, their carving and painting to create a vast landscape, overlaid with grainy images, this creates a fascinating montage. 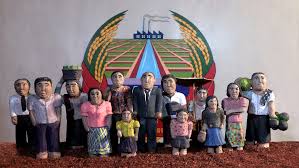 We hear about the happy family life Panh had in Phnom Penh, going to the cinema and studying. This all changed under Pol Pot's plan to re-educate and eliminate class divisions. Sadly most of his immediate family did not survive, however he was able to escape the Khmer Rouge by crossing into Thailand. A year later Panh moved to France and later graduated from the French National Cinema School in Paris.

Panh started his career directing documentaries, and his first feature film, Neak Sre (Rice People) was dedicated to the memory of his family. 'S-21: The Khmer Rouge Killing Machine', earned Panh numerous awards, and is told by interviews with former prison guards and the prisoners. The Missing Picture takes on the challenge of gently taking us on a journey through the very personal experiences of Panh, showing what it was like to have life changed so brutally and the hardships they underwent. I found the film very moving and beautifully created.

The Missing Picture is released in cinemas on the 3rd of January in the UK by New Wave Films.