Buster Keaton's The General & One Week 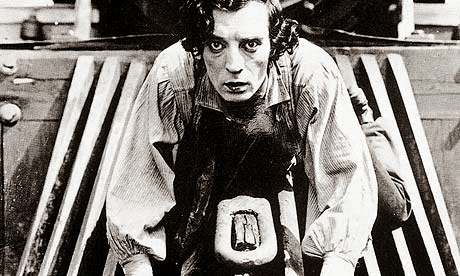 I must admit I am actually a complete ignoramus when it comes to classics, say, anything that was made before the 70's. An embarrassing hole in my film culture which I have decided to fill this year. Silent cinema and Nouvelle Vague are my main targets at the moment.

So I watched The General, my first Buster Keaton feature-length film and what a shock! The one thing I have noticed with the classics of silent cinema is how timeless they are, nearly a century later, and this is no exception.


The General would give many recent comedies/action films a run for their money. This is not quite as slapstick as I expected. In fact this finds a very rare balance between a more subtle comedy and real danger (the film is set during the War of Independence, and there even are a few on-screen deaths). It is gripping and hilarious from start to finish, with a sense of pace which many modern films can only dream of matching. It even has a lovely romance thrown in the mix, and a female lead who is an integral part of the action and not just a damsel in distress.

I mean, don't get me wrong, The General is still a marvel of physical humour, with some absolutely incredible stunts (one of them prompted a spontaneous applause within the audience where I saw it) and brilliant visual ideas, which made me realise where the ZAZ's took their inspiration from. I read somewhere The General being compared to Die Hard and I totally agree, it feels like a slapstick Die Hard on a train, with one man unwittingly thrown into a war against a whole army. As for Buster Keaton himself, a man of all talents, he completely owns the screen, with a mixture of touching vulnerability and assured resolution.

The General has been re-released on the big screen for an extended run at the BFI and the restoration work is wonderful, especially if you watch it in NFT1 on a 4K projection. As a bonus, one of Keaton's short, One Week, is being screened before-hand and it's a gem too.

Following a newly-wed couple who literally build their house of a box (with instructions attached), it gets increasingly weirder with some completely surreal humour and yet another display of fantastic stunts and physical visual jokes. I do not want to ruin it too much by describing them but the last ten minutes is just non-stop action and jokes, and again I can see of so many directors of more recent comedies have been inspired by Buster Keaton.