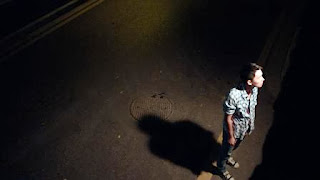 The downside of having seen so many films at the LFF is that I also had less time to write about them. And since at that rate I'll only have finished their reviews comes Cannes 2014 (or even LFF 2014), I have to resort to write shorter reviews, and reserve full reviews for those which really made an impact for all the right... or the wrong reasons! First off, 2 films from the Far East, two very different films who only have their relatively close geographical connection in common. As well as the 4 stars rating I gave them. 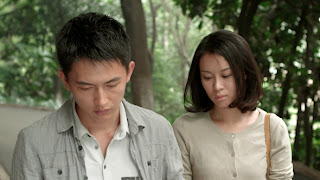 China finds itself in a very unusual, transitional situation at the moment. Still in the iron grip of a totalitarian regime, and yet more and more open to the West, with an emerging wealth and modernity, and semblance of freedom, with cracks beginning to appear. This paradox lies in the heart of Trap Street.

Trap Street is a very unusual thriller, which harks back to the halcyon days of the more political films of the 70's, but with its own atmospheric and subdued style, almost detached yet completely engaging. And first time director Vivian shows an in impressive grasp of direction that is full of promises for the future.

In it, a trainee surveyor meets a mysterious woman while on the job, whose seems to appear and disappear from his life at random. Besotted, he attempts to get closer to her, just as his own job brings along its share of secrets of mystery, having to install surveillance cameras, and being kept away from a street that does not appear in any map.

What impresses the most is how the director, with an modicum of effects, manage to distill a pervading sense of paranoia. Very little is explained, and we are put in the position of the hapless, lovelorn surveyor, who can only observe as he is trapped in intrigues and secrets that are out of his reach, and as figures of the authority go all 1984 on him. I was gripped throughout and I particularly liked the ambiguous ending. A low-key, neo-noir and cooly absorbing film, with an inspired cinematography which infuses mystery to the neon-lit, half deserted urban streets at night, Trap Street truly deserves a UK release.


Our Sunhi by Hang Sang Soo 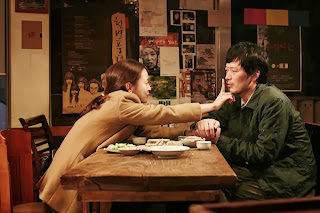 It is not a film festival if Hong Sang Soo is not presenting a film. I have come very late to the cinema of the South Korean director, whose films were very hard to see in the UK until now, but in only two films he became one of my directors to watch out for.

Here with Our Sunhi, I am already beginning to wonder if he is making variations of the same film over and over again though. Which can work, this is what most directors with a minimum of personality and style do, and you could say that about David Lynch, Woody Allen... And what he does, he does it so well. However a film director also needs to weave in enough novelty and take some risks for his films not to become redundant. And while I'm happily giving him a pass, audiences might not be as indulgent a few more films down the line.

In Our Sunhi, we follow the eponymous student, a rather reserved and volatile film student, and her rather complicated relationships with men. Some (including myself!) have, perhaps lazily, compared Hong Sang Soo to Eric Rohmer. And it is refreshing indeed to have a director tackle the complications of love and have his characters endlessly discuss them, when grown up films about relationships are so far and few between. 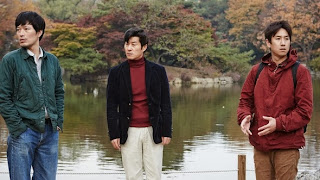 And yet again he adds to the mix his own particular ingredients. As ever, the booze flows freely, and his characters always seem to find themselves in that nick of time when the alcohol induced giddiness is about to leave place to the hangover of melancholy. Themes of friendships, longing, love, regrets are present as ever, as well as his reliance on the artifice of repetition (even if less pronounced than in his previous films). He also has the knack to add a deadpan and welcome sense of humour (see here how a letter of reference that Sunhi had requested becomes the oject of a hilarious, recurring joke).

But I still can't shake the feeling that there is nothing particularly new in here, after The Day He Arrives and Another Country, as eminently enjoyable as it is.