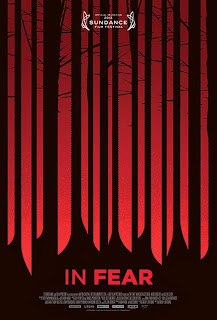 In Fear finds Lucy (Alice Englert) and Tom (Iain De Caestecker) a young couple travelling together to a music festival in Ireland. The tentative phone call by Tom to Lucy setting up the initial date signals the fledging aspect of what is just a two week relationship by the time Lucy agrees to change her accommodation plans to stay in a country hotel with Tom. Director Jeremy Lovering uses well honed psychological tricks to create a sense of fear for his film.


A pleasingly minimalistic film, there are no CGI bells or whistles employed though the presence of heavy, menacing music is lacquered onto the film with some gusto. The source of the titular fear is derived from highly recognisable, relatable sources: going on a long journey with someone you don't really know; getting lost as it's getting darker and something or someone might be lurking nearby waiting to get you. 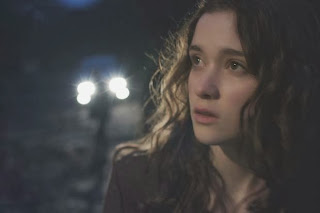 Both Englert (Ginger & Rosa) and De Caestecker (the Fitz of Agent of SHIELD's FitzSimmons) do a particularly excellent job at ramping up the nervous tension between an unestablished couple finding their way between each other. They also have to contend with the assumed protective buffer of their car slowly but surely becoming a dwindling island surrounded by hardwired human fears. Lovering keeps the film visually dynamic by his choice of camera angles magnifying the strong performances of his leads. Innate awareness of descending darkness and increased awareness of a malignant focused force taps into a natural self-preservation instincts.

When local Max (Allen Leech) enters the bubble of their situation, the psychological effects of being in a state of fear are played upon for all their Horror genre best effects. The direction that In Fear takes is an interesting twist on the female character and throws up the possibility for a 'What would you do?' post film conversation. There are some plot devices that arguable push hard against plausibility. However, In Fear does set up some genuinely unsettling scenarios that might well have one locking the car doors firmly down an unknown country road.

In Fear. UK 2013. Directed by Jeremy Lovering. Starring Alice Englert, Iain De Caestecker... Out in the UK today
at 20:37