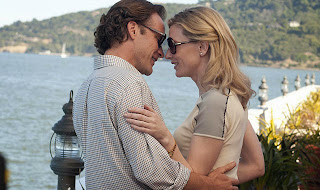 I have finally seen Blue Jasmine just after about everybody else, and I adored it, even though I never want to watch it ever again. I don't recall having been as depressed by a film since The Mist (which is a good thing in my book), and I am very sad that Cate Blanchett's towering and sensational performance will still see her lose out to Sandra Bullock for Gravity at the Oscars next year simply because the latter made more money. However I had a minor niggle with a plot development with Blue Jasmine while watching it, which felt a little artificial and convenient, until I began to wonder if there was more to it than met the eyes. And I developed a theory as below, which you absolutely should not read unless you have seen the film. SPOILERS

I actually wonder if Dwight wasn't actually a figment of Jasmine's imagination. I realise it sounds a bit far fetched, but think about it. She had all these traumatic experiences with men, from her lying, cheating husband, to the rapey dentist, and even the date that Chili brings over to hook her up with, who is kind of sweet but totally unsuitable (considering her expectations anyway). She had a breakdown and is clearly unstable still, with her pills popping, and indeed at the party she is seen talking to herself yet again.

Then she meets Dwight in that empty room in the house, and it's like he is everything she could have dreamed off, even with a tragedy that mirrors her own (his wife died), it's almost too good to be true. We never see them directly interact with anybody else, in that scene or in their subsequent meets. And the way their affair develops so quickly into a marriage proposition feels unrealistically fast, are we talking about a matter of weeks or even days? Plus his suggestion to move to Vienna, which again, fits in with her idea of a dream life.

And then just as she is about to get her engagement ring, she meets Augie and it ruins everything. The way he is filmed is almost dream like, he looks like an apparition in that unusual bright light, could it be that her guilt has caught up and she is punishing herself, snapping out of that fantasy life ahead of her which she feels deep inside that she does not deserve?

I realise there are gaps in my theory. When Jasmine gets the call on her mobile from Dwight, Ginger is nearby (although she does leave when her sister talks to him on the phone). And the scene with Augie meant she found out where her son works. So maybe he was not an apparition after all. But do we actually see him talk to Dwight, I can't remember? Maybe Augie was present and was solely talking to Jasmine, but Dwight was actually not there! What do you think? By the way, in case the above sounds familiar, I have also posted it on the IMDB boards!
at 23:13