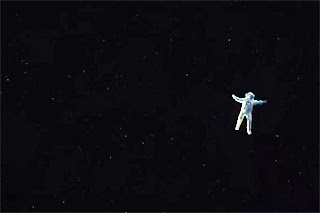 I have enjoyed Gravity quite a lot more than anticipated. And it is easy to forget, given its stratospheric box-office success, how much how a risky proposition it was on paper. Yes the story is pretty straight-forward, but it has moments of haunting beauty and devastating arthouse brilliance which I did not expect (I was particularly impressed by some of its unusual soundtrack). Even though the story is simple, having gathered my thoughts, there are a couple of metaphors which have sprung to mind. I am usually careful with those, and I particularly lament the annoying modern trend of over-analysing popular culture to death. But here they go: (SPOILERS)

At first, Ryan (Sandra Bullock) and Matt (George Clooney) are busy floating around the American spaceship, which is at once a marvel of its nation's past scientific achievements, a symbol of American might, of its economic and political pro-eminence, emphasised by Matt's near arrogant confidence.

But it all comes crashing when it is destroyed by flying debris, and sole survivors Ryan and Matt are seen flying onto space. At this stage, against all odds, Matt is still seeing as a reassuring voice, a remain of mighty Uncle Sam, certain that their fate is not sealed and there is a way out, just the same way as many did not realise the damage of the banking crisis which nearly destroyed the county until it was almost too late. But his reassuring voice begins to falter and flicker as they are separated and he begins to drift into nothingness, until his voice is no more. The American economical powerhouse is no more.

At this stage, Ryan finds refuge in an old Russian space station, old and defective. Remember how after the fall of communism in the late 80's, everybody was looking up to Russia as the next economic powerhouse. Well, some oligarchs might have taken advantage of the situation but you could almost argue that this Russian station, empty and decrepit, is an apt metaphor for what the country has become, a shell of its burgeoning self with all hopes of a better tomorrow vanished for most if its population.

And while that station itself comes to the brink of extinction, yet another, newer space station is seen as the way out, itself representing a new hope for the world, the Chinese station, with China being the emerging economical force we all know. And it is thanks to it that Ryan is able to survive and make it back home. 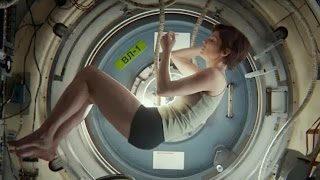 It has almost become a running joke that every big-budgeted Hollywood film must include a character with a traumatic back-story, usually the death of a relative. And while it applies in here, it also works. I was actually thinking at first, there is no way in the world that NASA would send somebody seemingly as unstable as Ryan into space. Then I began to think again...

After the traumatic death of her young daughter, Ryan admits to have lost all interest in life, which has become dominated by work. And she commits herself to it with great conscience and dedication, as seen in the early scene where she is determined to carry on with her task, despite the imminent danger. Matt almost did not feel real to me I must admit, seen as a reassuring, masculine voice. And then the shuttle is destroyed, a symbol of Ryan's job, and perhaps her last grip on sanity, and it is almost as if, lost in the midst of depression, she is free-floating through nothingness, at the edge of humanity, so close yet so far away.

Many times she is inches from death, many times she almost lets go, and one of the most powerful scene for me (which was all the most risky as it could have been so naff if poorly handled), is when she is in that Russian station, seen in a pre-foetal position, pretty much pondering whether life is still worth living, or whether to let go (as the tagline goes, "Don't let go"). And it is again the apparition of a ghost-like Matt, be it the shadow of a previous husband long gone since (we never find out anything about her daughter's father), or of her own father, which proves to be her last link to humanity, and fuels her almost depleted will to live. From there onwards, she goes from strength to strength, until her final re-entry into humanity which almost feels like a re-birth, ready to face the world again.
at 21:49