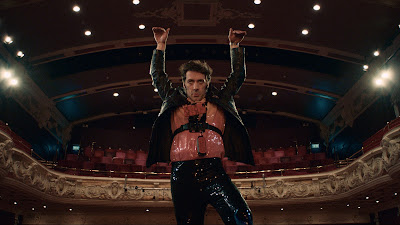 Paul Dood's Deadly Lunch Break has a rather brilliant premise. We have all seen the first rounds of reality talent shows in which the production team puts the spotlight on the most talentless and deluded, at times scary participants, with their dramatic walkouts as their dream of stardom are ruined by the judges, uttering some stern threats while security staff is on standby. So what if one of them actually followed through and went all Falling Down?

Enter Paul Dood (pronounced "Dude") a middle-aged man with a dead end job in charity shop, with dreams of making it big in the show business despite the years passing by and with the unflappable support from his mother. So when his big chance comes along with an opportunity to audition for talent show "Trend Ladder" that combines apps based audition and social media personal brand building, he puts on his best sparkly outfit and takes his mum along for support. Yet it all goes horribly and predictably awry and as his dreams are shattered and tragedy strikes, he vows to get his revenge and goes on a bloody rampage against all of those who wronged him on that fateful day but it does not quite pan out as expected...

The film is a dark comedy however it is immediately apparent that, for all its gore and murders, it is one with its heart at the right place. Paul Dood is a good-natured individual and for all his hopeless dreams, the script is careful to ensure the audience roots for him, depicting him as one of those very British loveable rogues who cannot quite let go of his 80s pop and glam rock dreams, one that is kind to his mum and awfully polite, if lacking of a certain awareness and Paul Meeten gives a measured performance, not needing to go over the top to earn our sympathy.

Paul Dood's Deadly Lunch Break gently pokes fun at some very British annoyances and idiosyncrasies from a jobsworth employee obsessed with health & safety to the rubbish state of the railways as well as some nice old ladies who love to gossip and the rather depressing and dull urban landscape of parts of the country, which will make Britons in particular giggle at those details that makes the tapestry of every day life in contemporary Britain.

The film also has very British affable side to it, which is both a strength and a weakness. There is something rather amusing about a rampage conducted with such a sedate pace compared to countless examples of mayhem in similarly themed American films such as the aforementioned Joel Schumacher film and any Death Wish incarnations. Yet Paul Dood is a little too sedate and lacking a bit of energy. As for the comedic side of it, it is a mixed bag, a lot of the early jokes fall flat or feel obvious although it does improve as the film goes along.

The supporting part is made up of well known names of British comedy, with Alice Lowe, Kris Marshall and Johnny Vegas playing some awful and corrupt characters in contrast to our lead, an opportunity they relish and there is a lot of fun to be had in their company. Kevin Bishop also turns up as a despicable TV host and is often hilarious despite his bizarre American accent.

Paul Dood's Deadly Lunch Break is an uneven but eminently likeable dark comedy that will be probably best appreciated among a full audience and with a bit of indulgence.