SXSW 2021- WeWork: Or the Making and Breaking of a $47 Billion Unicorn 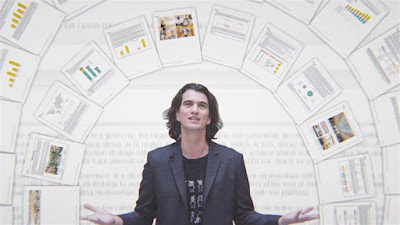 "If you tell a thirtysomething male he is Jesus Christ, he is inclined to believe it".

WeWork: Or the Making and Breaking of a $47 Billion Unicorn is the account of the rise and fall of WeWork, one of the biggest venture capitalist bubbles in recent years and his near messianic co-founder Adam Neumann. WeWork was in the not so glamorous business of renting office space in premises it had refurbished with a trendier edge except that with it came some grand promises of a new lifestyle, of a work revolution, of changing the world even. In it, Academy Award winner Jed Rothstein has interviewed several former employees at every level as well as those bought into the We lifestyle and gathered some extensive footage for a forensic investigation into this unicorn company, that promised so much and failed so hard.

What set WeWork apart was its mission statement that was actually the opposite of those giants such as Facebook and Apple, with their emphasis on the "I", the I of i-phone and their narcissistic and egocentric culture. Technically WeWork isn not a tech company but it was riding a burgeoning wave of disillusionment with those big names from Silicon Valley and instead replacing the I with We, WeWork was all about sharing a physical space with others, with connecting and collaborating with people in real life. While your tolerance for the company's new age BS might vary, there is no denying than witnessing the footage all these young, beautiful and creative people interacting and connecting makes one understand how attractive and earnest it would have come across to twentysomething professionals, untouched by cynicism as yet. The director is quick to show that with under the youthful veneer and party atmosphere were some very old-school working practices however: lower salaries than the jobs demanded, long hours, exploitation and betrayal... those who got burned are all too happy to relate those in details for the camera.

The company tapped in that youthful appetite to change the world, one that is both earnest and arrogant and that each generation goes through but perhaps even more millennials after coming into the job market during the recession. Yet it is not just members of that generation who got sucked in. The film depicts how older investors also got hit by the FOMO and it is revealing that it is indeed one of them who pushed the company over the edge by encouraging Adam to go bigger and crazier. There was no chance he would ever consider to be interviewed but we are presented with plenty of footage and first-hand account of the Japanese billionaire Masayoshi Son's involvement with WeWork to show how even the most experienced and wealthy businessmen can lose all common sense faced with a potential new golden goose.

WeWork: Or The Making... has some glossy production values and is fast paced, mirroring how quick it all happened with WeWork, skilfully detailing the financial developments of the company without losing us with too many details. At times however, its stylistic choices are a little on the nose: just as we are about to go from the rise part to the actual fall and an interviewee explains that no one at WeWork worried too much about consequences and the long term, images of dark clouds and lightening are edited in. Later we are told about the greed that gripped the company there is a montage of children stuffing their faces...

The second half does a great job of chartering the fall of the company when it all started to go wrong, when not even the endless self belief of Adam Neumann and the blind faith so many had put in him were enough to hide the hemorrhaging of cash. However that fall is indeed perhaps a little less spectacular than, say that of Fire festival organiser Billy McFarland or disgraced Theranos's founder Elizabeth Holmes which means the film loses a little bit of its earlier oomph. Despite allegations of substance abuse, being economical with the truth in terms of revenue projections and using the trust of countless staff members and investors, technically Adam Neumann did not commit an illegal act hence its exit feels a little anticlimactic, it is unlikely that a fictional adaptation will follow, in a Wolf of Wall Street kind of way.

There is not a chance in the world that Adam Neumann was ever going to agree to take part in its documentary but that is not to say it is one sided. It gives him a fair representation, as a complex character with charisma and endless self-belief, who genuinely believed he was going to change the world in the early days of the company and who truly had a vision besides making money. A tall, long haired and attractive Israeli, he had a striking presence even though he is shown to be meticulously cultivating it, working the camera of the countless TV shows he was invited to, repeating the same funny anecdote over and over again...

WeWork: Or the Making... is an enjoyable and insightful documentary, delivering just that touch of schadenfreude while still offering a fair account of these extraordinary events.

WeWork: or the Making and Breaking of a $47 Billion Unicorn screened in the Documentary Spotlight section of South by Southwest and will screen on the 2nd of April on Hulu.

WeWork: Or the Making... USA 2021. Directed by Jed Rothstein