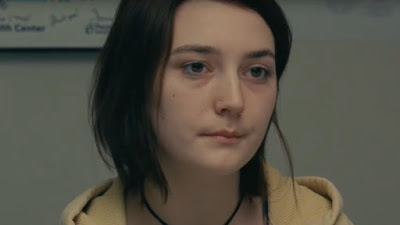 
Midway through Eliza Hittman’s quietly devastating new film about a 17 year old girl journeying to New York to get an abortion, the film’s reserved lead character, Autumn (Sidney Flanigan), chooses “Don’t Let the Sun Catch You Crying” by Gerry and the Pacemaker’s as her karaoke song. The camera holds on her as she seemingly sings it to herself. Autumn’s choice and the lyrics act as the film’s thematic anthem and as a gateway into Autumn’s guarded emotions.


Set in a small town in Pennsylvania, which might as well be anywhere America, director Eliza Hittman introduces us into Autumn’s interior world with another piece of music: she sings “He’s Got the Power” by the Exciters at a high school talent show. This vulnerable expression of herself — and the obvious suggestion that she’s being abused in some way — is met with sexual harassment by a boy in the audience and later again at a restaurant. At home she’s quiet, perhaps submissive, and her step-father can’t fathom interpreting what her silence means. When she finds out she’s pregnant her local clinic pushes her towards a fundamentalist route. A lesser film would turn these conservative figures into caricatures — here they’re presented as genuinely kind but with a manipulative agenda. Now desperate because she needs to go somewhere without parental consent, Autumn and her supportive cousin Skylar (an excellent Talia Ryder), also a teenager, steal money from their work and journey to New York.

Though they don’t show it, Autumn and Skylar are both scared. The small-town-to-big-city film has been done many times, often presented as an exciting road trip, but there’s an urgency and ticking-clock danger here. The young women present themselves as mature to adult figures, but their circumstances force them to submit themselves into roles for men. They lie about their age and why they’re in New York, and when they don’t have any money left Skylar turns to a guy they met for help and is forced into an uncomfortable position as a sexual object.

Hittman tells the story in-between the lines, in the small gestures and expressions the characters communicate through. I would’ve liked a little more camaraderie between these two women, letting the audience just spend time getting to know them, but I appreciate the refusal to conform to familiar storytelling. And the film is never too cold; Skylar’s pure friendship and desire to help Autumn creates a constant feeling of empathy. Instead of dialogue, Hittman and DP Hélène Louvart often focus on hands as extensions of communication and emotion. Early in the film, Autumn and Skylar clock out of their shift at the supermarket and ritualistically slide their hands underneath a window so their older male boss can kiss them. The point is uncomfortably clear: men in power abuse women in powerless positions. Later in the film, Hittman repurposes this with an image that is heart-piercing in its palpable expression of the unspoken bond these young women have in awful circumstances.

The way shots are held has a strange intensity to them; framed in invasive close-ups, they mix vulnerability with a yearning for honesty. It’s as if Autumn knows the camera is on her and she wants to express her feelings but she just... can’t. The men in Autumn’s life are apathetic — it’s the women of this story that understand her hidden self and trauma. There’s a long unbroken close-up during the scene in which the title is stated that is movie magic. A counselor asks Autumn about her sexual history, consent, and abuse; her responses become quiet as she holds back emotion. Her silence is understood, finally. It’s a mesmerizing and cathartic piece of acting from newcomer Sidney Flanigan that perfectly uncovers the film’s emotional center.

Never Rarely Sometimes Always is arguably the most successful modern film that uses form to express the POV of a young woman with such clarity and precision. Andrea Arnold’s 2009 film Fish Tank is the last film to wade into similarly harsh social realism and emerge with the same level of compassion and illumination. The expressionistic filmmaking of Hittman makes Autumn’s POV seen in a social environment that leaves young women in the margins. These rarely seen spaces, filled with hidden emotions, and unseen identities is what Never Rarely Sometimes Always makes visibly felt. By the end, the quiet, visual approach to Autumn’s journey from the rural to the urban hits with a calm wave of emotion — the small moments of silent communication turn into a universal journey of womanhood and the ways in which women are forced to cope in a patriarchy.

This is a small, but remarkable must-see film: urgent, intuitive, and expressing intensely repressed emotion through its visual language. The relevant social politics of it aren’t overt or self-aware, but humanist and reflective. Eliza Hittman’s film is about a girl surviving on the fringes of her own life, hoping her silence can be understood, waiting for brief moments in which compassion can find its way in. “Oh don't let the sun catch you cryin' Don’t let the sun catch you cryin”

Never Rarely Sometimes Always is out in the UK on digital platform on the 13th of May 2020.