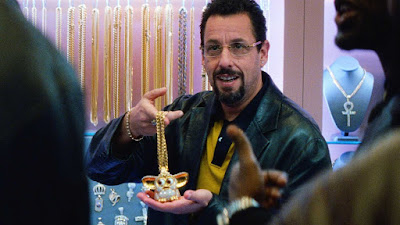 There’s a mysterious pull that emanates from Uncut Gems, at once a cosmic and microscopic power that seems to orchestrate the chaotic thrills of Adam Sandler’s Howard Ratner. Josh and Benny Safdie follow up their manic midnight caper, Good Time (2017), with this addictive carnival centered around a New York jeweler.

This is Adam Sandler returning to arthouse cinema with a story that's like the Book of Job as a gambling drama, or a Seinfeld episode as an action movie -- it’s a dirty joy to behold. Through a stunning and humorous visual metaphor that opens the film, we understand that it is in Howard’s DNA to seek out riches; not for the result, but for the act of desiring, of trying to reach the end of the maze where it’ll all be clean and finished. It also very literally tells us that Howard is an awful person.


Uncut gems are dirty on the surface, grimy and old, but beneath is an otherworldly beauty. Almost hard to see, but you know it’s there, seemingly calling back to you. To Howard, you can see the entire universe inside the film’s titular gem: a rare opal found deep in an Ethiopian mine. It’s this suggestion of cosmic mystery that reverberates through all of the chaotic subplots that kickoff when Howard lends Kevin Garnett (yes, he plays himself) the opal. As Howard frantically tries to get it back, we observe him lie and cheat his way through transactions and bets, falling into deeper holes before sneakily escaping out the back door.

As brilliantly manic as it is, Uncut Gems hits its ceiling halfway through and glides to the finish line. It’s too plotted out, with a few contrivances, to fully enrapture you in its tornado -- and it never quite finds an emotional center for Howard that allows catharsis. These are quibbles that hold it back from blasting off into classic territory, but as a pure filmmaking exercise it’s undeniably powerful. Plus, it's just thrilling to see Sandler back in action.

The Safdies juggle a gallery of memorable characters -- many impressive non-actors -- that dive into dark and seemingly inescapable corners. Julia Fox is the obvious highlight and a future star, but newbies like Wayne Diamond and Keith William Richards command the screen like veteran character actors. Watching Sandler’s Howard navigate this neon maze is like watching a sporting event. We laugh, cheer, and scream — then the game ends. Uncut Gems gets you drunk — bringing you shot after shot until you pass out and leave with a hangover. It’s one of the most entertaining movies of 2019, and you can hear the sirens signaling the emergence of a serious filmmaking force in Josh and Benny Safdie. bonus: this is a great entry to the dumb husband genre and also features perhaps the greatest sexting scene of all time.

Uncut Gems is out in the US and UK.