The Irishman by Martin Scorsese - Review 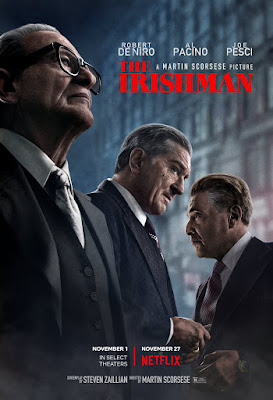 The opening scene of Martin Scorsese’s The Irishman drops the viewer into a dim and dreary nursing home as the camera slowly hovers through the mundane halls of lives that are nearly over. The whiz-bang opera of gangster films is deflated as Robert Deniro’s Frank Sheeran is revealed to frame, talking directly to us, or perhaps more-so, to himself. Consider how Henry Hill is introduced in Goodfellas as a man who achieved his devilish dream, or how Jordan Belfort immediately boasts about his insidious kingdom of wealth in The Wolf of Wall Street.


This is a film that could only be made after those films (as well as Mean Streets, Casino, Gangs of New York etc.), with the perspective of time. It’s best viewed as the Unforgiven (Eastwood, 1992) of the gangster genre – a definitive statement from a master filmmaker. What happens to a mob movie when you take away explosive musical moments and gangsters living like kings? In The Irishman, we follow Frank Sheeran as he tells his life story, starting in WW2 and chronicling how he became involved with Russell Bufalino (Joe Pesci, returning form retirement), the mafia, and Jimmy Hoffa (Al Pacino), head of the Teamsters. Scorsese calmly lures us into this icy world of politics and power (told through Deniro’s voiceover like a grandparent sharing his life story) – but eventually we realize we’re not here as audience members; instead we act as the grim reaper peering down on his prey, aware of these character’s trapped fates. The Irishman is a graveyard.

At three and a half hours, Scorsese executes a masterclass in filmmaking that fuses power, politics, and crime into a clear web of connections (perhaps the most accessible I’ve ever seen) that shines a light onto the shadows of 20th century America. Digital de-aging effects used to make the principal cast appear decades younger can be distracting and imperfect (the film’s only major flaw) but there’s an unintended resonance; it makes us highly aware of the malleability of memory as well as the deterioration of flesh over time.

The Irishman’s dialed in focus on Hoffa and Sheeran’s dual chess match through history reveals itself to be something of a con for the audience. It’s not until the film’s final hour, as we near the harrowing climactic moment of the story, that it becomes clear what The Irishman is really about. The controlled, bulldozer pacing and alleyways of eccentric characters comes to a halt. We’re left to stare agonizingly at the “present” and how the past has deteriorated. Physically, and in the annals of history, all of these men, their battles, their bodies, their achievements, are decayed, forgotten, dead.

The genius at play here is the small accumulation of details that create a grander tapestry of meaning. Scorsese presents the iconography of gangster films with an electric, almost poignant passion. The image of a gun thrown in the bottom of a river is of a piece with a gun hidden in a glove compartment later on. The imagery of food and an incessant appetite is paralleled later on as old men can barely eat. Family dinners turn into a man sitting alone at a table. Coffins clash with images of fire and ash. Doors are left open as gateways into the men hidden inside. Scorsese and cinematographer Rodrigo Prieto craft a mosaic of interlocked iconographies that also chart the fates of these doomed men.

Martin Scorsese, using this film as a sort of career summation, has taken an existential syringe to the gangster genre -- leaving these characters to wallow in the misery of time’s passage. At the end of the line -- even having had so much power that they bent 20th century history to their will -- terrible mistakes haunt them all like a specter. Time leaves us left to stare out a cracked door, waiting until you hear those final footsteps. It is what it is. Cut to black.