The Vast of Night by Andrew Patterson 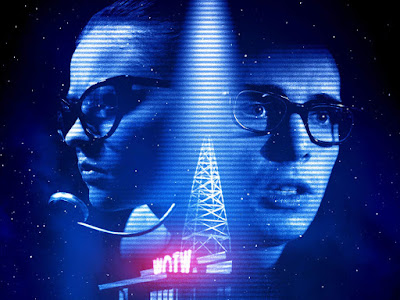 In the midst of a summer without theaters, promotional tours, and major studio releases, the way we process cinema has taken on a life through different channels. A handful of interesting films have made a splash, but perhaps the most effective recreation of “Movies” as an abstract term is Andrew Patterson’s The Vast of Night, a micro-budgeted retro throwback to The Twilight Zone and the science fiction drive-in films of the 1950s. It’s a close encounters short story that’s imbued with a cinematic creativity born out of necessity. Ironically, so far the film this year that best replicates the feeling of seeing a film communally is a remarkably small one. It’s left me wondering: how do we define cinematic experience now?


Through specific aesthetic choices—overtly recalling The Twilight Zone to the point that this film begins on an old TV inside your own TV—The Vast of Night has a sense of showmanship. It’s retro without resorting to gimmicky nostalgia or cute references. Set at night in a small town in New Mexico, we follow two plucky teenagers, Everett (Jake Horowitz) and Fay (Sierra McCormick), as they investigate mysterious radio signals while the rest of the town is at a high school basketball game. The two teens wander spooky, empty streets, with the camera following from a distance, making the viewer an uncomfortable stalker of their playful conversation. This aesthetic of making the viewer feel like a “presence” in the film is a clever way to involve viewers as an active participant in the story while Everett and Fay begin to learn more about what’s going on in the shadows of their town. Patterson is assured in his direction, knowing how even with a minor budget the audience’s strings can be pulled. At times the film covertly evolves into an eerie tone that’s beguiling, making you want to lean in closer while you pull a blanket over your eyes.

Narratively Patterson and his writers, James Montague and Craig W. Sanger, show their cards too early, relieving the bulk of the mystery, offering a palatable finale that seems a bit on-the-nose for a film that delights in re-contextualizing tropes through formal creativity. There’s a feeling that with a slightly bigger budget the filmmakers would concoct a second act to flesh out these two main characters and their motivations, while also building a social examination of the town that seems missing--especially in the context of The Twilight Zone, which dripped with explicit social and political critique. The faults here are mostly due to constraint, and the sparks come often enough that you can’t help but admire the filmmaking on display. Patterson doesn’t sustain his opulent frequency of mystery/wonder/horror for the entire film, but it creatively sings when it does.

The notable achievement here is a tonal balancing act that recalls the feeling of Spielberg’s blockbusters, but is interested in building upon it—using form to further boundaries. The likes of Super 8, Stranger Things, and IT touch on this popular aesthetic but embrace the warmness of 80s nostalgia for what I would argue is audience comfort and a brief serotonin rush of “hey I recognize that!!!” While much smaller, why does The Vast of Night feel more inventive than those? I’d argue what makes something “feel” cinematic is intent. The act of watching a film requires audience submission in which they subconsciously desire to be manipulated without realizing it. The feeling of someone pulling the strings is a way to understand “cinema” as an abstract term.

Patterson is interested in the ways we experience stories. We see it in the way his characters talk to each other about people in the town, how events are presented as first person short stories, and in how the characters listen to recordings. Large portions of the film hold on a character’s face as someone over the phone tells them a story about their possibly extra-terrestrial experiences. We, the audience, watching someone react to a story that’s being told to them forces us to become voyeurs eavesdropping on what now feels like a secret conversation. It’s a simple but wonderfully effective technique that makes us process storytelling through a different lens. The Vast of Night is a nifty little examination of old school sci-fi and the aesthetics they’re built upon—and how we process them. As an overall film it’s a creatively exciting but incomplete work—and likely a warm-up for whatever film Andrew Patterson does next.

With theaters being a question mark, the cinematic experience has become a void, and there’s no clear sense of when they’ll be operational and presenting new films. Cinema is drastically changing in the way it’s made and how it’s released; Covid-19 has exponentially sped up that process. The ways in which we experience cinema remains important and vital to the art form itself. For myself, re-contextualizing the ways in which I watch movies has been a replacement for the cinema experience. Pick a day and time and make an event out of the worthwhile films that are being released! In the case of The Vast of Night, embrace it in the spirit of sci-fi B-movies and take your laptop outside, grab some old school candy, and hit play right as the sun goes down; or, watch it at midnight with the lights off just as you would for a Twilight Zone episode. The cinematic experience may be drastically changing, but it will always remain that—an experience.

The Vast of Night is available on Amazon Prime.
at 21:36