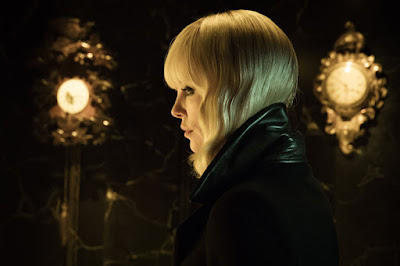 
With an action filled narrative and a truly impressive cast lists to boot, Atomic Blonde had all the ingredients needed to be one of the best blockbusters of the summer, rivalling even some of the most robust franchises. However, things didn't quite go to plan for this stylish, yet completely forgettable production. Staring Charlize Theron and directed by stunt actor turned director David Leitch, the film is a ballsy female-centric action flick which takes no prisoners when it comes to violent fight scenes, shoot-outs and car pursuits. However where things don't quite add up, is in its inability to keep audiences interested long enough in its unnecessarily far-fetched storyline about Soviet spies and double agents. In short,  for a film which purports to have an action female as lead, this really should have been way more exciting than this.

It’s November 1989 and agent Lorraine Broughton (Charlize Theron), a top-level operative working for MI6 is sent to Berlin to officially identify the dead body of a colleague, with whom she has been romantically linked. Part of her mission is to also find out who killed the British spy and why. Met by MI6 agent David Percival (James McAvoy), the two do their best to work together to unmask a Soviet spy ring and a host of double-crossing agents. Before he is found and killed by the soviets, Broughton must find and help East German dissident Spyglass (Eddie Marsan) cross to the west in exchange of what he knows. Add into the mix a shadowy figure and highly suspect French photographer named Delphine (Sofia Boutella), and you have a truly convoluted cape and dagger storyline which is sadly let down by a meandering narrative and a far too complicated plot line, which stops you from being fully invested in its characters.

Theron is utterly brilliant as Broughton, she fights she shoots, and even has a sapphic liaison with Boutella’s character. With a brilliantly eclectic late 80s dance and industrial soundtrack, the film is faultless in its nostalgia aesthetics, but sadly this is just not enough to keep anyone hooked long enough to care otherwise. McAvoy is impressive as ever, as is Toby Jones as one of Broughton superiors.

On the whole, if badass fight scenes you’re after, then look no further because the film has it all. Theron, who is almost in every single scene look and sounds thproughly convincing, however if you were expecting a less reductive storyline, then you’re fresh out of luck. An exciting action thriller, which is sadly wholly forgettable.