Land Of Mine By Martin Zandvliet 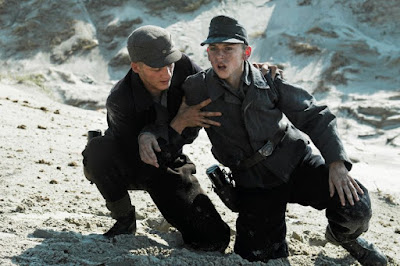 Set during the immediate aftermath of WWII, some might be tempted to describe Martin Zandvliet's Land of Mine as a war movie. In reality, this beautifully crafted and wonderfully acted Danish production is one of the most powerful indictment against warfare yet, and goes a long way into nailing its pacifist colours to the mast. Zandvliet who writes as well as direct, manages to tell in 90 minutes what most war movies seem unable to convey at best of times. It is a film about the struggle to come to terms with loss, hardship and makes a strong case against conflicts which send young innocent men to their death.

It is 1945, and a group of German PoWs make their way through the Danish countryside. Hungry, tired and emaciated, the young men, in some cases still in their adolescent years, are intercepted by the angry and cruel Danish Sgt. Carl Rasmussen (Roland Møller) who intends on making the young boys' lives a misery. Ignoring the Geneva convention of 1929 which forbids forcing Prisoners of War to carry out hard labour or dangerous work, the boys are nonetheless gathered and entrusted with the task of clearing the Danish shores from Land mines which had been installed by the German army as a precaution against the  D-Day landings.

Twins Erns (Emil Belton) and Werner (Oskar Belton) Lessner find themselves battling against the whims of the unstable Danish officer who intends on making them pay for what his country has suffered under Hitler’s rule. As the group is rendered weaker by the minute due to being starved and kept in squalid conditions, one by one they start to get sick, leaving them unable to conduct their chores. Taking his responsibility as the leader of the group to heart, young officer Sebastian Schumann (Louis Hofmann) pleads with Rasmussen to allow his men some dignity.

Zandvliet manages to make a beautifully sedate and a thoroughly nuanced commentary about the human condition without ever resorting to over-dramatisation or jingoistic gestures. His ability to convey the hardship felt by these young men highlights the moral dilemma faced by many after the war. Having suffered greatly under the Third Reich, many felt the need to resort to violence towards the enemy, even if the enemy was indeed young enough to still be a schoolboy dreaming of going back home to his parents. A genuinely astounding feature which may not be an easy watch, but which is nonetheless essential viewing.