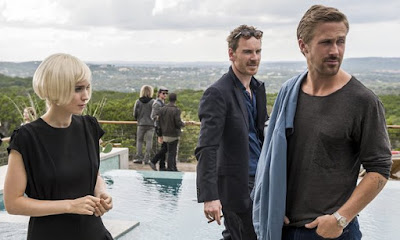 Song to Song is the third film in Terrence Malick's semi-autobiographical trilogy about love. Stylistically they're born from The Tree of Life with each being a slightly different branch. To the Wonder twirled its way through a love triangle but failed to blossom. Knight of Cups (the best of the three) was a Fellini-esque glide through Hollywood by way of tarot cards. Rick's (Christian Bale) interior was reflected out into the film's dreamy visuals and you could at least feel the buds sprouting. I'd hoped Song to Song would be a culmination of this style. The Austin set love triangle between Rooney Mara’s musician (she was born to be a Malick character), Ryan Gosling's singer-songwriter, and Michael Fassbender's power hungry producer, lands somewhere between its two predecessors.


The film coheres a bit more to narrative than the last two, but Malick still leans toward fragmented shapes and tangents that don't build the characters or allow them to take root. Mara and Gosling's musicians fall in love immediately and their overflowing emotions are articulated the same way as the past two films’ lovers. They revert to a childlike playfulness and roll around, tickle each other, and smile. Three films of this type of intimacy nears self parody, but I can’t call it that because in these moments of earnest connection are fleeting glimpses into the interior souls of the characters; however, they're less sustained than in Knight of Cups, a film that smartly focused on one central character.

Malick’s love-struck characters dance and gaze and yearn (which fits well in this film’s setting). He shoots endless hours of footage and then slices moments together with a cosmic intuition. This completely untethered technique creates moments of stunning emotive tissue but then it'll flatline into a broken record for 5 minutes straight.

As beautiful as Emmanuel Lubezki's cinematography is, I can't help but feel the loose floating camera puts strain on this film's drama. The collaboration has offered gorgeous visuals and heightened emotion (The Tree of Life is the decade's most beautiful film) but here it feels like the dynamic has run its course. Four closely related films in six years would become repetitive for any collaborators.

There are not many filmmakers that ask their audience to so nakedly connect to their characters. Malick places emotions over everything. Every aspect of his cinema is designed to reach into the soul of the audience, and it only has a chance of working if the audience is reaching back. This trilogy seems far too narrow in execution to consistently reach the audience, but all three are unique in that the flawed execution is what is so striking, and occasionally moving about them.

You already know if you are going to like Song to Song. It'll frustrate viewers unfamiliar with Malick and also those alienated by his previous two films. But if you're like me, and at least admired the intentions of this love trilogy, then please go buy a ticket because there are emotionally penetrating moments sprinkled all throughout. Regardless of how good these three films are, nobody is making movies like them. It's worth restating the obvious: Terrence Malick is one of the greatest filmmakers ever.

This experimental trilogy is wildly uneven, but it also feels like a vital and necessary addition to his filmography that needed to be exorcised so he could move on. He's now in post-production on Radegund, a supposedly more narrative driven film that's set during World War II. It would not surprise me at all if Malick had another masterpiece in him because if you look past the shifting form, he hasn't changed one bit since a boy met a girl in South Dakota.

Song to Song is out on limited released in the USA. No UK release date announced as yet.