The Eyes of My Mother by Nicolas Pesce 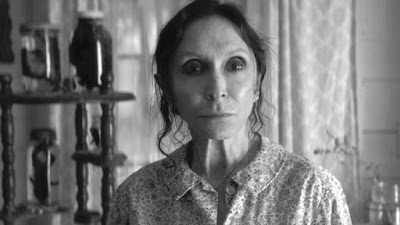 Fans of gory, stylish and all together disturbing horror movies rejoice, others please look away now. Written and Directed by Nicholas Pesce, The Eyes of My Mother is a directorial debut like no other; this black and white moody auteur piece may not be to everyone's liking, but is nevertheless one of the most original films of the year. Its visceral depiction of a young woman’s descent into a quiet madness is sure to strike a chord with those on the look out for a different kind of horror movie.


Carefully divided into three sections, the film follows Francesca (Olivia Bond) a young girl living in an undisclosed reclusive area somewhere in the American South with her father (Paul Nazak) and her mother (Diana Agostini), formerly an eye surgeon in her native Portugal. After witnessing the brutal death of her mother at the hands of a stranger, Francesca slowly descends into an all encompassing passion for violent death and violence which soon sees her build a twisted world from which no-one is able to escape. 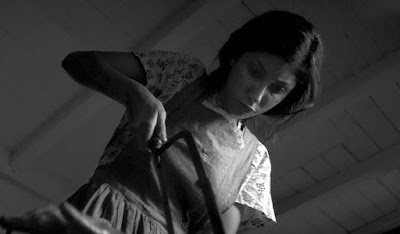 As an adult Francesca (Kika Magalhaes) is seemingly unfazed by her mother’s death. She quickly takes on the role of the head of the household, cooking, cleaning and mending clothes for her ageing father. It soon transpires that her childhood trauma has lead her into a morbid fascination with loss, her fear of solitude even results in her keeping her father’s corpse in the house long after his death. With a soundtrack drenched in the beautifully haunting sounds of Portuguese Fado, the film is beautifully shot and masterfully directed by Pesce. Magalhaes’s puts in a faultless performance as a deeply deranged, yet strangely charming young woman. Her ability to transform from loving and caring daughter, to ruthless killer is almost unnerving.

Pesce plays with themes relating to solitude, depression and alienation; his film might be aesthetically pleasing, but is likely to leave some audience members wondering what they let themselves in for. Yes, it’s true that some of the violence and gore might lean towards the gratuitous, but it is also important to point out that there is so much more to take away from the film. Pesce uses allegory and imagery relating to grief and loneliness to tell a disjointed story. Ultimately, The Eyes of My Mother could seem bewildering for those not willing to see beyond the gore, but ignoring the violence, what we are left with is a truly fascinating piece of filmmaking which is at its best when not resorting to cheap thrills and scares.