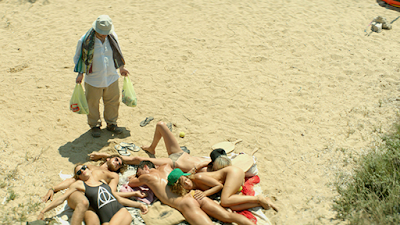 Suntan from Greek director Argyris Papadimitropoulos starts out as a portrait of a lonely local doctor unexpectedly drawn out of his shell by a summer romance and ends, brilliantly, as a psychotic character study in the vein of Pablo Larrain’s Tony Manero (2008).

GP Kostis (Makis Papadimitriou) meets hedonistic party girl Anna (Elli Tringou) when she is rushed into his surgery one bright morning after gashing her thigh in a scooter crash. He treats the wound and endures the chaotic joking of her friends good-naturedly. In return, they hail Kostis as “the best doctor in the world” and invite him to join them at the beach. He does and seemingly becomes part of their tribe, going clubbing every night, jeopardising his professional life by staying out late and drinking too much, all the while pining for Anna to the obvious amusement of all.


The cracks soon begin to appear, however. The paunchy, middle-aged Kostis proves far less comfortable with his body than the exquisite, cheerily naked revellers around him and he commits a bad social faux pas in refusing to kiss a gay member of the group during a drunken party game. The final straw comes when Kostis takes Anna to a secluded beach but cannot perform sexually. Suddenly finding himself cast out by the clique, the good doctor becomes desperate, drowning his sorrows and stalking the campsite where they’re staying in the hope of remonstrating with Anna. Sucked into a downward spiral of depression and despair, his behaviour becomes increasingly erratic and disturbing.

The tale of a respected community elder brought low and degraded by his love for a femme fatale, Suntan is like an update of The Blue Angel (1930) for the Eurozone crisis. Josef von Sternberg’s film, which starred the great Emil Jannings as an eminent school teacher reduced to the sad state of a sodden burlesque clown by his pursuit of Marlene Dietrich, was based on Professor Unrat (1905) by Heinrich Mann. It was the latter’s brother Thomas though who brought this theme to sunnier climes in Death in Venice (1912). Like Aschenbach in that novella, Kostis finds no hiding place from his ruined body and growing humiliation in the unforgiving glare of the Mediterranean sun. He fools only himself with his fantasy of a blissful future with Anna — every bit as immature and casually cruel as her youth entitles her to be — and loses everything in trying to will an impossible dream into existence. Kostis may reject the friendship of predatory local barfly Takis (Yannis Tsortekis) but this is because he knows, deep down, that he is no better than his lecherous doppelgänger.

August is a crucial month for a Greek economy reliant on tourism, with many islanders dependent on the income they earn from holidaymakers to last them the rest of the year. This perilous state of affairs may be lamentable but it makes for an ideal backdrop to the fascinating psychodrama Papadimitropoulos unfolds before us. Handsomely shot and building to an emotional crescendo expertly, Suntan is superbly realised.

Suntan is out in the UK today