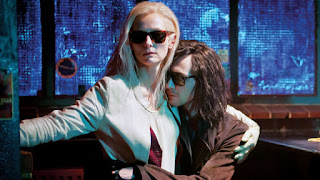 You would think writing about an event a month later is tricky. Not when it is the Cannes Film Festival. Each of its editions since 1992 is branded upon my brain, and I remember all 21 films I saw in 1993 for example, the lady I was sat next to when I saw The Piano, when I saw Gary Oldman just outside the jury's lodge and asked for his autograph... To think there was no Twitter, no blog, nothing to relay all this at the time, and few of my friends actually cared about any of it apart from the actual "being in Cannes Film Fest" cool factor. So yes, my last day in Cannes 2013, twenty years later...

As amazing as the festival had been up until this point, I had my eyes on my most anticipated films of all, which was also the last film shown in competition: Only Lovers Left Alive, by Jim Jarmush. I mean, a vampire film by Jim Jarmush! With Tilda Swinton! And Tom Hiddleston! For some bizarre reason, the film had been added to the line-up a few days after the official announcement of the competition, and I wonder what kind of politics took place behind the scene to explain it.


I am a big fan of Jim Jarmush, despite having seen only a handful of his films (including the fantastic Dead Man, his black & white existential western with Johnny Depp, seen in Cannes back in 1996), but I love the way he has remained a true independent director, faithful to his own vision and style. And it is truly fitting that he has finally made a film featuring vampires, considering he is obviously one himself. I mean, have you seen him? Have you ever seen him in the daytime? I thought not. Also, he hasn't aged in three decades. I particularly loved his latest, The Limits Of Control, with him at his most radical and laconic. 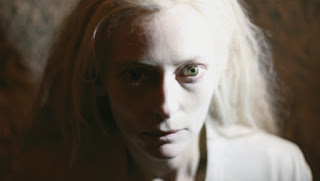 So on this last day, I mercifully skipped Venus In Fur's early morning screening, since filmed theatre by Polanski bores me to tears after Carnage, and one had thing in my mind and one thing only, an invitation for the only daytime screening of Only Lovers Left Alive. Despite the sun, an unseasonal cold wind was sweeping the Croisette, and I posted myself three hours before the screening with my little sign with huge letters begging for an invitation for this particular film. The crowd of invitations chaser was quite simply, the biggest I have ever seen in all my years at the festival and my heart sank. I kept trying to convince myself that it was no big deal if I did not manage to get one, that I had an amazing festival so far, that I would see it no matter what... Deep inside I knew that the festival would not be complete if I did not succeed.

Let's just say, after 2 hours of anguish, a kind young woman, having at first tried to exchange her invitation for anything else with anybody around her, basically gave up and decided to give it to me. I could not help feeling sorry for everybody else who were still trying, and the usual frisson about being allowed in or being too late quickly dissipated, and I got to my seat. Things took on to a bizarre turn when two guys sat next to me I got chatting with offered me a lift to Paris that same night in their car, when I said I wished I had more time to see my family there before going back to London. I didn't take on the offer, as tempting as a nighttime road trip with two perfect strangers sounded. Shame, it could have gone all Stranger By The Lake meets Roadkill.

Only Lovers Left Alive follows two vampires, Adam (Tom Hiddleston) & Eve (Tilda Swinton), who find their particular way of life threatened with the arrival of Eve's younger and wayward sister, Ava (Mia Wasikowska). And it's wonderful, everything I wanted from it and then some. Coming out of it, my tweet review read out: "A languid and witty rock poem".

Of course, you wouldn't expect Jim Jarmush to make an ordinary vampire film, even though he actually incorporates quite a lot of the creatures of the night's usual conventions (his vampires cannot withstand daylight, they drink blood, and can turn others into vampires too). The pace is measured, the tone witty, the plot rather thin and the indie rock soundtrack as incredible as usual. But I love the way he updates the vampires's coda while retaining some of its classical elements. There is a wonderful romanticism on display in here, not of the naff variety, but the one which sees two millennium old creatures still bask into each other's undying love, while pursuing their thirst for arts and culture, a world in which they hang out with undead playwright Christopher Marlowe (wonderfully played by John Hurt). 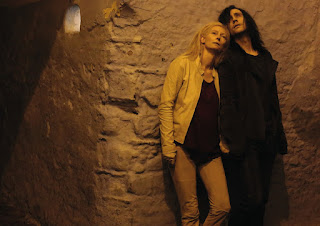 They might be aesthetes, but modern ones too, looking like they belong to some lo-fi gothic band, and hanging out in rock bars where you nearly expect them to bump into Miriam & John Blaylock (Catherine Deneuve & David Bowie) from The Hunger, two characters they have a lot in common with, especially with their outfit (even though Tilda Swinton's unconvincing wig looks like a straw hat threw up on her). In fact, Adam is a musician himself, part of a cult band and surrounded with guitars and modern sound equipment.

Jim Jarmush pairs us some unusual locations to the most wonderful results: Tangier and Detroit (and if you do wonder how vampires can travel from one to the other by plane without seeing the daylight, well this issue is tackled with an amusing call from Eve to a travel agent). Both cities look absolutely gorgeous under the director's camera and incredibly evocative. Tangier seems like a more natural choice, given its literary and alternative heritage, but Detroit looks just as ravishing at night, in its urban eeriness of neon lights and deserted streets.

Interestingly, the thin plot I described earlier is actually the film's only duff note. Not the fault of Mia Kasiwowska, who is a brilliant actress, but her character of an annoying teenager almost threatens to derail the film, and takes it in an unwelcome direction. Thankfully, this is only a short part of the film, and it could have done without the need of any real plot development without a problem. Instead, I was quite happy mainly following its two leads, Tilda Swinton & Tom Hiddleston, who have a fantastic chemistry between them, making their millennium old love affair perfectly believable. They quite simply look like they were born to play those characters, which they inhabit with studied nonchalance and otherworldly presence.

Deadpan, cultured, atmospheric... Only Lovers Left Alive was yet another great film I saw in Cannes this year, a remarkable edition by all accounts.

And that was it for the day, with my 15th film of the festival. I had been given an invitation for a screening of Plein Soleil, with Alain Delon attending, but as I saw the crowd beginning to assemble and queue up two hours before the screening, I decided to leave on a high, and finish my festival with the wonderful film I had just seen. The only hope left was that the jury would not embarrass itself with a rubbish Palme d'Or the following day. You all know the results by now, and have probably forgotten most of it, but I should give my two cents on the prizes in my final Cannes post.