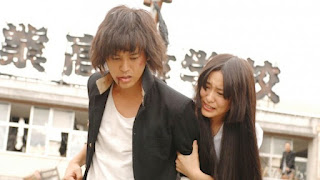 Some films are truly cursed. I had an invitation for For Love's Sake for its midnight screening slot in Cannes last year, but had to give it up as I had no way to go back to Nice on time that night (I should have slept on the beach, a timeless Cannes tradition). Then I booked a ticket to see it at the London Film Festival later in the year, only to fall victim to the seemingly inevitable LFF flu. But finally, while it did not secure a cinema release, For Love's Sake is now available on DVD/Blu Ray, and I have seen it without the world ending, result.

I was about to call this Takashi Miike's latest, but with the prolific director, you can be sure that he already has at least 3 news film finished by now. In fact, I saw his more recent one Shield Of Straw at Cannes this year. I cannot think of anybody who has tackled more different genres and styles than the Japanese director. He is the man who gave us a film about a half-man/half-zebra superhero (Zebraman) after all.


In here he tackles a teenage manga adaptation. The story itself is your usual "rich girl falls for guy on the wrong side of the tracks". In it, for high school student Ai (Emi Takai), it's love at first sight when she catches a glimpse of bad boy Makoto (Satoshi Tsumabuki). She manages to earn him a place on the top high school she is studying at (and in where she excels at everything, as she is not shy to tell us in a musical number!). But when his wayward behaviour gets him expelled, she follows him to a much lower grade, nightmarish high-school, populated by violent gangs, determined as she is to save him from himself.

I have to admit, the story is not the most interesting aspect of the film (and there a bit too many supporting characters who do not add to much), although it does descend into darker territories than you might expect in the second half. In fact, the structure becomes a little repetitive after a while: exposition scene, followed by a musical scene, followed by a fight scene. 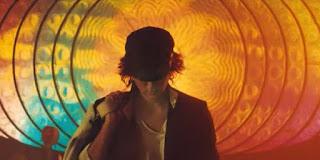 But while usually, Asian graphic novel adaptation tend to fall for the same visual stereotypes, Takashi Miike brings in a very imaginative style, with an unusual yellow and red palette which echoes 70's/early 80's exploitation (the film is based on a 70's manga) and an impressive sense of direction, even if rather messy at time.

Those unfamiliar with the world of Japanese teenage manga might be in for a shock, with some of the local idiosyncrasies proving a little too much to bear. When travelling on public transport in Japan, it is not unusual for male commuters to openly read comics with the most graphic and unpalatable display of violence towards women. And while there is nothing nowhere near as extreme, or even close to what the director has done in the past, it is a little uncomfortable at time, with some slapstick cartoon violence often directed towards teenage girls (although just like in cartoon, nobody seem to suffer any long term effect!). Some of it actually reminded me of the comical sadism perpetuated towards the contestants of Takeshi Kitano's tv show, Takeshi's Castle.

As for the musical scenes themselves, they oscillate between forgettable running time-filling numbers and the truly inspired (a gang scene reminiscent of West Side Story), with the songs themselves a mix of naff J-pop and some more unusual pieces with some very amusing lyrics (especially one from an alcoholic middle-aged woman and her tribute to boozing).

For Love's Sake will not earn Japanese cinema some new fans. But as a visual feast and an oddity, it is worth catching up, especially for those fans of Takashi Miike, who might have worried he had gone down the path of respectability with his recent films.

For Love's Sake is out in the UK on DVD/Blu Ray today, and is released by Third Window.