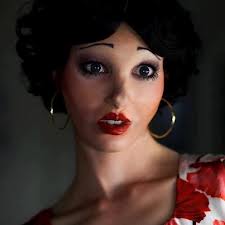 The BAFTA awards, a glacial snooze fest where American stars pretend to care. Golden Globes who once gave an acting award to Pia Zadora. The Oscars who picked Crash over Brokeback Mountain. Now that we have established that film awards are worthless, time for the real deal, the FilmLand Awards 2013.

Best Film That Is Not Real: The Equestrian Vortex by Giancarlo Santini

The film within the film in Berberian Sound Studio, which we never see (apart from its fake credits) but hear a lot of (obviously given the title), sounds like a brillantly demented film, a sort of 70's Italian horror exploitation with ultra violence and hints of Suspiria. I do hope it gets the Machete treatment, from fake to real feature length film.

Worst Use Of Charlize Theron Without Giving Her Character The Ability To Roll Sideways And Getting Her To Say FAAATHER In The Most Dun Dun Duuuuun Fashion Award: Prometheus.

Fairly self explanatory I would have thought


The Isabelle Huppert Award For Most Awesome Actress:  Charlize Theron in Young Adult

A scintillating and understated performance in which sympathy and evil are like oil and water, they meet but never mix

As a scenery chewing evil queen who not so much stole the show as making me forget that anybody else was actually in the film (and probably for the best), she owned this. Shamelessly OTT and seductively lethal, Ravenna deserves her own spin-off.

Do I need to say more?

We never see it, but we hear it, my god, don't we hear it (which makes sense, given the title). And let's just say I would not want to come across a dangerously aroused goblin in a dark alley!

Yet again a rather self explanatory award, where tribute to classics meets smut


Best Looking Unfazed While Sitting Next To A Raging, Aherm, Male Appendix In A Sate Of Arousal: Eva Mendes in Holy Motors 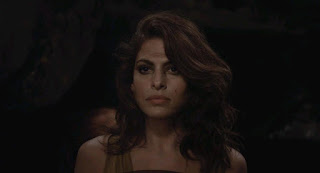 She might have had a silent cameo, but it is the work of a great actress that she managed to look so unfazed next to Denis Lavant reprising his part of Monsieur Merde, while eating her hair and displaying a raging emotion.

Ok I'm cheating, V/H/S is out in January. But I was utterly terrified when (SPOILER) the dodgy looking girl whispering "I like you" (and now I run a mile when anybody says that to me) turned out to be some winged gargoyle creature who basically splits her head open when revealing her true apperance. And it terrified me.

As if mini cocktail bottles were not amazing enough


Most hilarious accent: Chris Hemwsorth in Snow White And The Huntsman

Schnow phfwaite? Tchnaw Phouaite? Is it Scottish? Is it medieval? Is it drunken Australian after a night out? We shall never know. Nor do we want to know. Or ever hear it again.


Best Waste Of A Recurring Character/Brilliant Actress: Joan Allen in The Bourne Legacy

We all love Pam Landis in the Bourne franchise, so we rejoiced when we found out she was to reappear. Only she only turns up for a few seconds, and worst, she goes on trial for treason! Way to shaft us all

Ooh tough choice, but the winner had to be Kiss of the Damned by Xan Cassavetes with her French aristocratic feuding vampire sisters shot in soft focus like a naughty French horror of the 70's

Ok I'm cheating again, the film is out in January, but then I saw it in Frightfest last year. Cabaret artist Tristan Risk has a wonderful supporting part in it and you just have to look at the picture above to understand why she won, looking like a brilliant cross of Betty Boop and a cat.


Best "Stop being so mean, you guys!" Award: To All Of You, Haters of Marion Cotillard in The Dark Knight Rises.

I am sorry she was not THAT bad, even (SPOILER) in her death scene. Besides, Cottilard's husband went on the record to defend his wife, explaining that the actress had given Christopher Nolan a wide range of different acting for this scene and he picked that particular take. Besides, Marion Cotillard just missed being nominated for an Oscar so, who's laughing now? (Now hang on a minute??) Well she nearly was nominated for an Oscar anyway. (For Rust & Bone obviously, not TDKR)


Best Humiliating Experience In A Cinema Award: Me At The Shining At The BFI

On a Sunday night, while in a drunken stupor walking along the South Bank, I decided to see The Shining which was just about to start. I drunkenly decided that I wanted to take a picture of a certain iconic image of this horror classic, sitting in the last row, in the dark. Little did I know that my I-phone flash was on, and it went off, three times, illuminating the whole cinema, with the audience wondering what was going on. I spent the rest of the film mortified.


And Finally Best Cinema Seat: Yet Again The Red Velvety Caresse Of NFT1 At The BFI

They make any screening seem naughty and seductive