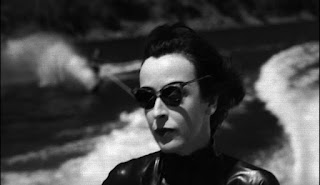 In Dharma Guns, a man suffers a terrible jet-ski accident. Waking up partly amnesiac, he goes after a mysterious pharmatical corporation in the strange island country of Los Estrellas, which manufactures a medication he has become reliant on, which seems to turns its subjects into zombies in too high dosage!


Maverick French director F.J. Ossang is one I have been waiting for a long time to finally see a film of, over twenty years in fact! Back in the early 90's, as a teenager in France, finding my fix of cult/alternative film news was not easy, in those pre-Twitter, pre-IMDB, pre-internet dark days. Mad Movies was fun but perhaps too focused on horror, Premiere & Studio did not venture too far outside the mainstream, and Les Cahiers du Cinéma was too po-faced at the time. So it left me with one film magazine, Starfix, a short-lived venture that people of my generation remember with much fondness, as it opened our eyes to a whole new world, championing the early work of David Cronenberg, David Lynch, John Carpenter, Peter Greenaway etc... 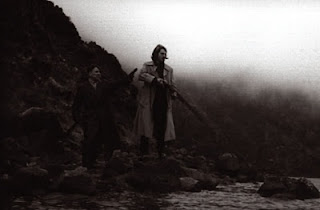 It was in those pages that I first read about French director F.J. Ossang, and his film Le Trésor des îles Chiennes (roughly translated as The Treasure of the Dog Islands), which seemed intriguing enough, a sort of black & white punk experimental/old school adventure film, but which never made it to any cinema in my city. After that, I did not hear about him ever again (although he briefly became my friend on Facebook, I even had a short conversation with him once, a rather surreal experience) until I came across the trailer for Dharma Guns recently and I knew I had to see this. 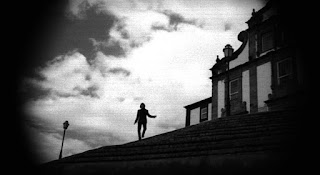 If the story sounds straight forward, it is nothing of the sort. Or rather, it might be perfectly clear, but we are only presented with the skeleton of a story, with entire backbones missing. Characters are not introduced, entire plot developments are cut, and it is up to the viewers to use his own imagination to fill the blanks and link the dots. It might sound frustrating but it is nothing of the sort. Often throughout the film, we are left wondering: what are we actually seeing? Flash backs? Memories? A vivid dream? Where are we? The land of the dead, the non man's land of an artist's imagination?

There are very few directors who have such an inimitable and immediately recognisable style, David Lynch, Tim Burton, Pedro Almodovar... And FJ Ossang is one of them. Here we are back with the impossibly stylish and coherent visuals, with the gorgeous black & white, and the dreamy atmosphere. There are echoes of the French 80's punk music scene, of old fashioned serial adventure novels (with a touch of science fiction), and presented in an impossibly stylish package. Some have even branded him a punk Lean-Luc Godard, as just like the old master in his later days, he loves nothing more than adding some seemingly random text inserts throughout, which adds to the strangeness of it all. 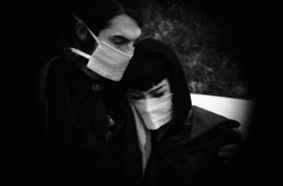 And using non-professional actor Guy McKnight (singer of the band The Eighties Matchbox B-Line Disaster) in the lead with his old school romantic beauty with a modern twist, complete with long dark hair and heavily accented French, gives it an extra layer of oddness. As for the women, while none of them have much of a meaty role in this, the director has a gift to make them all appear timelessly glamourous and mysterious, in a way that only David Lynch can match.

Any fan of experimental and cult cinema should lose themselves in the unique world of FJ Ossang, in all its abstraction and beauty.